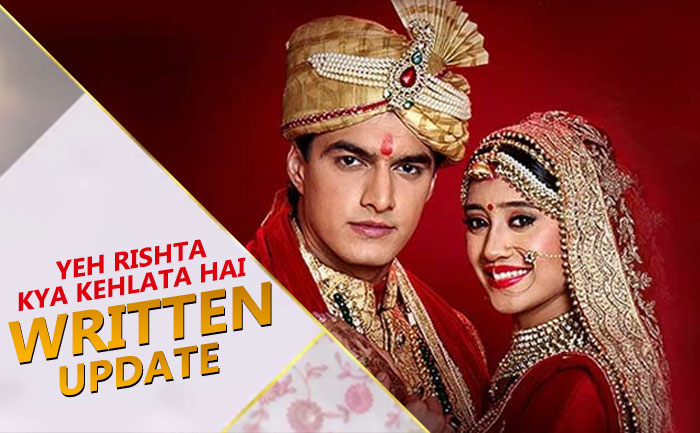 Yeh Rishta Kya Kehlata Hai 4th October 2019 Written Update: In the last episode, we saw Naira got worried about learning Kartik hired a renowned lawyer Damini Mishra, who she wanted to hire to fight the case. Before appearing in the court, Vedika offers sweet to Kartik and wished him good luck for Kairav’s custody case while he asked her to stay away from Naira and his son’s matter.

Later, Suhasini asks him to eat the sweet before going to court and tells him that he should not take Naira as his enemy and prefer his family’s prestige in the court. To which, Kartik tells her that he would do as she said and keep in mind things that she had told him. Yeh Hai Mohabbatein Spoiler

At the same time, we see Naira making all possible efforts to convince her son Kairav to go boating with Kaveri and Devyani. Somehow, she manages to convince him that she has some works to do. While leaving for the court, Naira gets herself injured. Kairav finds Naira’s phone and runs out to give it to her and falls down. Naira comes back to look after Kairav’s injury which caused she reached in the legal proceedings.

Naksh hurries and assures Naira that they would make it on time and asks her not to worry. Meanwhile, the lawyer, Damini instigates Kartik by telling him that it was one of Naira’s gimmick and like she had warned him earlier, people often tend to behave out of their usual behaviour in order to win the case.

As they are about to reach the court, Kaveri tells Naira and tells her to return immediately. Naira comes back home and finds Kairav in a tricky situation. While playing, a piece of peanut gets stuck in Kairav’s nose and Naira suggests him to sneeze as hard as he could. Yeh Rishta Kya Kehlata Hai Spoilers

Meanwhile, Kartik gets infuriated as she could not make into the court and leaves for the Singhania house. Suhasini, Surekha and Gayu were confused and thinking that why she did not attend the legal proceedings.