Zaira Wasim on quitting Bollywood: Her manager Tuhin Mishra clarifies that her Twitter account was not hacked 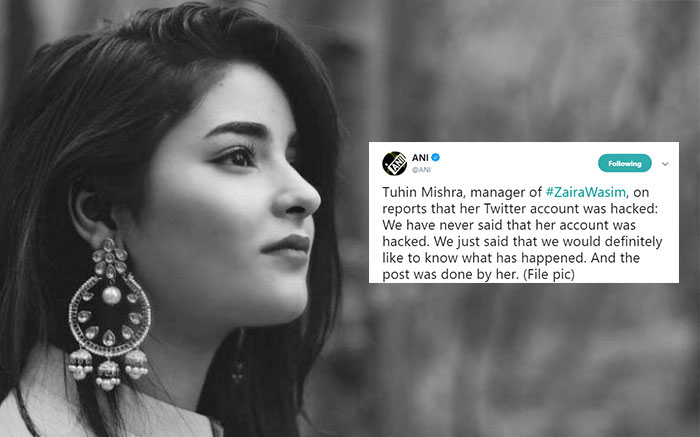 Hours after Zaira Wasim announced her disassociation from Bollywood, there have been rumours flying high that the account of Zaira Wasim was hacked and the post was not done by her. Ever since Zaira made an announcement of quitting acting, the Secret Superstar actress has been trending on social media.


Notably, on June 30, Zaira took to Facebook and wrote a lengthy post in which she informed that she is quitting acting as she feels that her Bollywood career threatens her relationship with her religion and Almighty Allah.

”As I complete 5 years today, I want to confess that I am not truly happy with this identity, that is, my line of work. For a very long time now it has felt like I have struggled to become someone else. As I had just started to explore and make sense of the things to which I dedicated my time, efforts and emotions and tried to grab hold of a new lifestyle — it was only for me to realise that though I may fit here perfectly, I do not belong here,” her post read.

Following her Facebook, many have supported her decision while several including Bollywood actress Raveena Tandon have slammed her for ”regressive thoughts”. Her decision has also triggered social media and news channel debate.

Meanwhile, Zaira Wasim will next be seen in Shonali Bose’s The Sky is Pink, which also features Priyanka Chopra Jonas and Farhan Akhtar in lead roles.