Weapons are crucial to progressing with ease in Dark Souls 3. A good weapon can make navigating the gameplay a lot easier. There are more than 50 available Dark Souls 3 weapons in the game. The choice of weapon and upgrades can have an immense impact on the game experience.

With this in mind, we put together a list of 10 best Dark Souls 3 weapons that can be found early on in the adventure. Some weapons in the list can also be used to get preferred bonuses. In the end, only the player can decide what style suits their character build and gameplay style best. Location: The Uchigatana is located outside the Firelink Shrine. Players will need to head right after leaving the front entrance. Here, they will encounter an Uchigatana wielding Sword Master. If players can successfully kill him, he will drop his Uchigatana and armor. This is no easy feat though.

Details: The Uchigatana is the first Katana available in the game. With its fast swings and high base damage, it has the potential to be a primary weapon in the game if upgraded. This weapon is great for parries. The Hold skill helps knock opponents off-balance and leaves them open to counter-attacks. Location: The Claymore is situated on the High Wall of Lothric. It can be found in the far left corner of the top platform where the Dragon breathes fire.

Details: The Claymore is a powerful but low weight weapon. It yields enormous damage in a dual-wielding style but can provide speed and agility if singularly wielded. The Claymore can also be infused and customized. Location: This Rapier will need players to defeat the Crystal Sage boss in Road of Sacrifices. This will grant a boss soul. It can be traded for the Crystal Sage’s Rapier with one catch. Players need to have a Transposing Kiln that is obtained from the Curse-Rotted Greatwood.

Details: This Rapier might be best suited for a magic wielder such as a Sorceror or a Pyromancer. It makes up in speed what it lacks in terms of power. It comes with an intelligence primary attribute without infusion. Another perk of this weapon is that it has a 50 Iten Discovery attribute. This allows players to rare items with more frequency. Location: The Irithyll Straight Sword is located in the Undead Settlement. It has been dropped near the bottom of the elevator by the Outrider Knight. It is mandatory to kill this enemy in order to progress further in the game.

Details: This weapon manages quick strikes and high base damage. While it can be infused or buffed, its frostbite attribute is pretty useful in PvP. Location: The Sellsword Twinblades are located on the Road of Sacrifices. After entering the area, players should enter the water before heading right. Next players will need to enter the castle walls in the corner of this area. The Sellsword Twinblades are positioned beyond the Black Knight. If players choose to be Mercenary, they can just get it as a starting weapon.

Details: The Sellsword Twinblades have high base damage. This weapon can rank up pretty high in Dexterity if infused.  It allows for high momentum combos while also dealing a decent amount of damage to enemies. The Twinblades are a starting weapon for the Mercenary class. In addition, they are also available as a premium choice for Rogue/Thief type characters. Location: Arstor’s Spear can be received as a trade reward for Soul of the Rotted Greatwood and 1,000 souls.

Details: Arstor’s Spear is, arguably, one of the best Dark Souls 3 spear weapons. This spear comes with the unique ability to poison hit enemies. Due to this, players can compound the damage to claim victory. This long-range melee weapon can poke enemies with high damage. The ranged based weapon is also great for keeping enemies at bay. Details: The Butcher Knife is a big and menacing weapon that also has a great moveset. Its skill allows players to gain health with each successful hit. This is a good weapon for a Strength reliant play. However, it does slow the gameplay down to accommodate for the weight of the weapon. Location: Dark Sword is located on the High Wall of Lothric and Farron Keep. It can be received as an item drop from Darkwraiths. Players can kill Darkwraiths outside the Abyss Watchers boss battle to get this weapon.

Details: This is a truly customizable weapon. Players can make this an A-rated blade through upgrades and infusions. The Dark Sword can be modified to suit the game style with a versatile range in strength as well as dexterity. Location: The Deep Battle Axe is located on the High Wall of Lothric. It can be gained as an item drop from Mimic in the dungeon. To obtain this weapon a player needs to attack the mimic that resides in the tower beneath the Dragon.

Details: The Deep Battle Axe is a variant of the battle axe infused with a deep Gem. The Warrior class starts with the battle axe. This is the most powerful weapon players can find early in the game damage wise. Its skill allows players to stun nearby enemies and self-buff. In addition, the Deep Battle Axe also offers an above-average moveset. 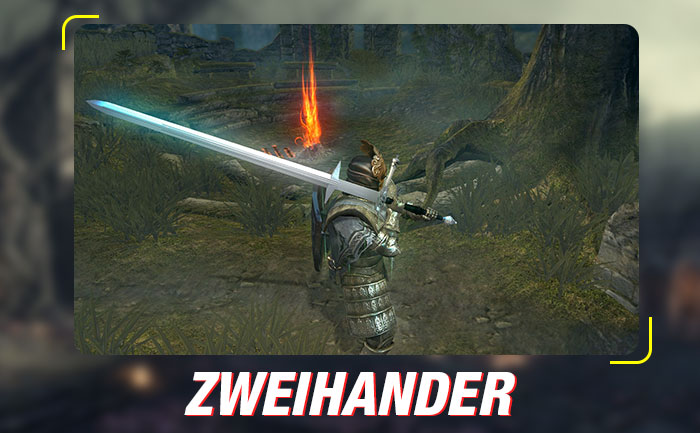 Details: The Zweihander is a great addition to the Dark Souls 3 weapons. It is one of the first Ultra Greatswords that can be acquired in the game. Zweihander is a big, lumbering weapon that deals big, hard-hitting blows to enemies early in the game. It can also be infused and buffed which makes it a good potential primary weapon.