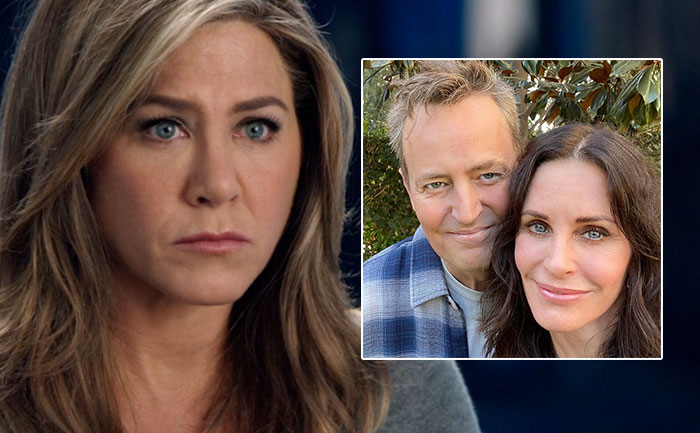 On Friday, Courteney Cox took to her Instagram and shared a selfie with her Friends co-star Mathew Perry post their lunch date. Sharing the picture, she captioned, “Guess who I had lunch with today…I KNOW!! Could I BE any happier? #realfriends”

Guess who I had lunch with today….I KNOW!! Could I BE any happier? #realfriends

Many celebrities and fans wrote to their comment section to express their happiness and one of them was Jennifer Aniston.   She wrote, “MATTY!! I LOVE YOU, GUYS” .  Lisa Kudrow too took to the comments section and wrote, “Lucky lucky. #beautifulpeople.”

Recently, Aniston walked the pink carpet forward of the SAG-AFTRA Foundation’s Patron of the Artists Awards in Beverly Hills. She was asked about Cox’ and Perry’s lunch date photo, to which she replied with a question,  “I know! How come we don’t get invited to that?”

Aniston also spoke about getting support from Cox and Kudrow, as she received the Artists Inspiration Award during the SAG-AFTRA, she said, “It’s incredible. It’s like having your family stand right behind you because these things are a little nerve-wracking.”

On Ellen DeGeneres’s show ‘The Ellen DeGeneres Show’, while talking about the Friend reunion, Jennifer said that the cast might reunite, however for a different project. She said, “We would love for there to be something, but we don’t know what that something is. We’re working on something.”

On the work front, Jennifer Aniston a part of the Apple TV+ series. ‘The Morning Show’ which centers around a story of sexual misconduct along with Reese Witherspoon.