Home > Gaming > How to get Vehicles in Death Stranding

How to get Vehicles in Death Stranding

Types of vehicles players can find in Death Stranding 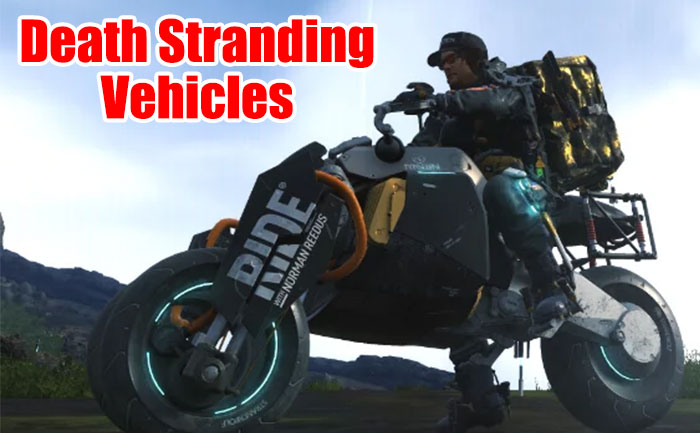 Vehicles are an undeniable asset in Death Stranding. They can assist players in moving faster while also allowing for more cargo to be carried. Motorcycles and Trucks are the two kind of vehicles available in the game. Players can craft both if they’ve obtained the necessary blueprints and materials. In this guide we will give you a brief introduction to the vehicles available in Death Stranding and how to get them.

The First Vehicle in Death Stranding

The first vehicle found in Death Stranding is a reverse Trike. It is located in front of the Distribution Center West of Capital Knot city, in the middle of the Eastern Region. It has drained batteries and players will need the generator blueprints to charge it. These blueprints can be found by completing the Wind Farm mission in Chapter 2. After this, players only need to prop the generator next to the bike to charge it.

How to Craft Reverse Trike

Players can also craft bikes in Death Stranding. Blueprints for crafting the bike can be received from Order No. 23 – Retrieval: System Server mission in Chapter 3. With the blueprint acquired, players can craft infinite bikes as long as they have the resources to do so.

While it is fast, there is no extra cargo space with the bike. It also loses speed if players are carrying a heavy load. The bike loses points in defense as it leaves players open to attack while also being loud.

How to Unlock Truck

Players can also craft trucks in Death Stranding. The blueprint for these is unlocked through raising the reputation with Distribution Center South of Lake Knot City, in the Central Region. Trucks cost a lot more than bikes but are much more sturdy. They also provide additional cargo space.