Here's what BTS's RM has written in a sweet letter to his Pilates teacher. 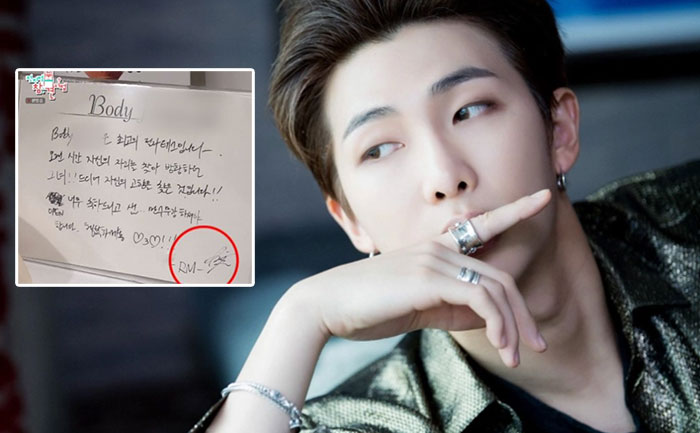 A few days after BTS singer V aka Taehyung had written a note for a Korean restaurant owner, yet another BTS member has been in the news for writing a letter to his Pilate teacher. BTS leader RM aka Kim Namjoon has reportedly written a special note for his Pilates teacher after she opened her own studio.

The special note of BTS member RM was shared by a BTS Army on Twitter. In a short video clip, the Korean show showcased a Congratulatory message from RM for the opening of his Pilates teacher’s new studio.

Addressing her teacher, RM said that she has been finding her place for a long time and has finally found her foot in her own hometown.

“Congratulations on the opening the studio and teacher, please live a long and healthy life! Be happy Beating heart3Beating heart – RM,” the fan translation of the note revealed. BTS ARMY showered RM with love.

“He is so sweet 🙁 the best Pilates student ever,” a fan gushed. “joonie always finds the best words, he’s the cutest :(” added another BTS ARMY member. “namjoon popularizing pilates!” pointed out another fan.

he's the most kindest and sweetest person on this planet aahhh pic.twitter.com/RzLflfqMpF

Joon is such a sweetheart. I hope that teacher will cherish his letter for a long long time ^-^

The BTS leader RM had been in the news for purchasing a luxurious apartment in Hannam The Hill, Seoul. According to a report in AllKpop, BTS member RM has bought a 4.9 Billion KRW ($4 million) dollar apartment in the luxurious Hannam the Hill located in Hannam-dong, Seoul.

The luxurious apartment that RM has bought is located in a picturesque location and known for its excellent environment, including community facilities, fitness centres, a swimming pool, sauna, screen golf, cafe, reading room, and guest house. The report also stated that it is not easy to buy property there.

BTS has recently announced that they are rescheduling their Map of the Soul tour dates for North America. Their decision to change dates comes amid the Coronavirus pandemic.

From Pulwama to Coronavirus, When Akshay Kumar donated crores to help needy