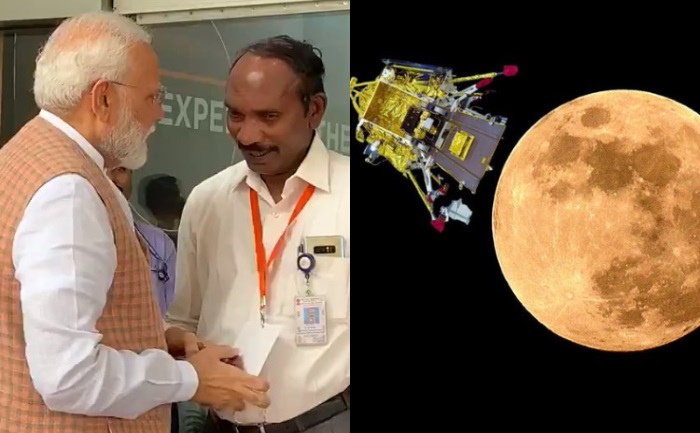 The day had dawned full of hope and expectations as Chandrayaan-2‘s Vikram lander successfully aced various stages of its lunar descent. But soon the jubilation turned to despair as space agency ISRO lost contact with the lander minutes before it was to land on the Moon.

Yes, things were going as planned and years of hard work was all set to be paid off. The Vikram lander was descending on to the lunar surface. Scientists at the Indian Space Research Organisation were cheering and clapping as the historic moment came closer to be fulfilled. But the excitement and joy soon turned to despair as Chandrayaan-2’s Vikram lander lost contact with earth minutes before touchdown.

The PM consoled the ISRO chief and in his speech said all is not lost,

Check out the PM speech here;

Isro chief K Sivan broke down after the speech and in a video that has gone viral on social media, PM Modi was seen consoling him with a heartfelt hug.

This is how a true leader uplifts his team through unstinted support and warmth!
Salute to PM @narendramodI Ji #Chandrayaan2 pic.twitter.com/Hx8OMIiHrY

We do not know if the Chandrayaan-2 lander has crashed. The Indian Space Research Organisation has said they are currently not in a position to confirm anything. But there is still hope. The Chandrayaan-2 orbiter, is in orbit around the Moon. The orbiter is where the majority of the experiments that are to be performed by Chandrayaan-2 are located. It carries eight scientific payloads for mapping the lunar surface and study the exosphere (outer atmosphere) of the Moon and has a mission life of a year.

We are proud of our scientist ‘s who have made it possible for India to achieve the impossible.