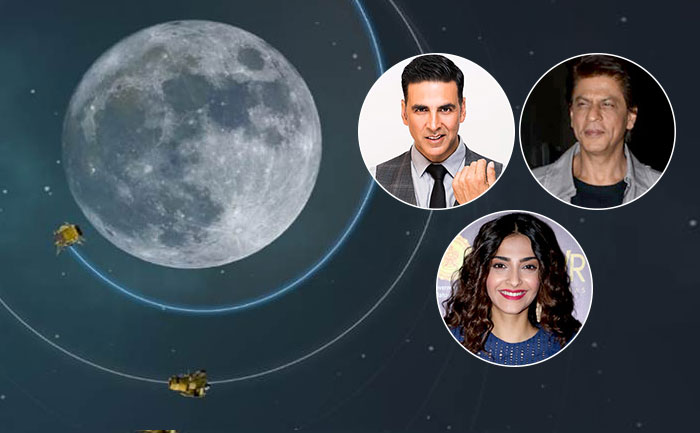 It was a historic day for India and its scientists as Chandrayaan 2 was all set to complete the final phase of its task in space. The lander Vikram glided down towards the moon surface but sadly 12 minutes before touchdown it lost contact with ISRO. The Indian Space Research Organisation (ISRO) lost communication with the lander when it was about 2.1 km from the surface of the moon. ISRO chairman K Sivan confirmed the news in a statement shortly after.

The ISRO scientists were hailed by Prime Minister Narendra Modi and many leaders across the world. Even Bollywood celebrities like Shah Rukh Khan, Akshay Kumar, Sonam Kapoor and many more took to their social media handle and not only applauded the scientist’s in ISRO but also expressed their pride in their efforts.

Here’s what they had to say:

The country stands together, proud and hopeful! Thank you @isro. #Chandrayaan2 🇮🇳

Sometimes we don’t land or arrive at the destination we want to. The important thing is we took off and had the Hope and Belief we can. Our current situation is never and not our final destination. That always comes in time and belief! Proud of #ISRO

There’s no science without experiment…sometimes we succeed, sometimes we learn. Salute to the brilliant minds of @isro, we are proud and confident #Chandrayaan2 will make way for #Chandrayaan3 soon. We will rise again.

Success and failure will come and go but the determination to succeed will forever remain constant. Proud of you @isro and deeply touched by this consolatory gesture from PM @narendramodi .. Jai Hind. https://t.co/OYSbUrluG1

Lump in the throat, tear in the eye not coz of anything else but witnessing how beautifully you got the entire nation together in hope and spirit… it’s ok to take a few steps back when u know you are about to make your longest jump. You are our hero @isro ❤️

We shall over come!!!!! Future belongs to those who believe in the beauty their dreams!! We are incredibly proud of the entire team of @isro – what was achieved today was no small feat. #JaiHind https://t.co/ktuJjb9ozx

Obstacles are a part of every journey that aims to achieve something phenomenal!
I join the entire nation in applauding the great work done by the scientists of #ISRO in taking us a step closer to the moon.
You‘ve won our hearts!
Kudos to your efforts🙏🏻#ProudOfISRO #Chandrayaan2

It is a laudable effort by the ISRO scientists and we are proud of their work.