25 cool exotic animals you can legally own as pet, 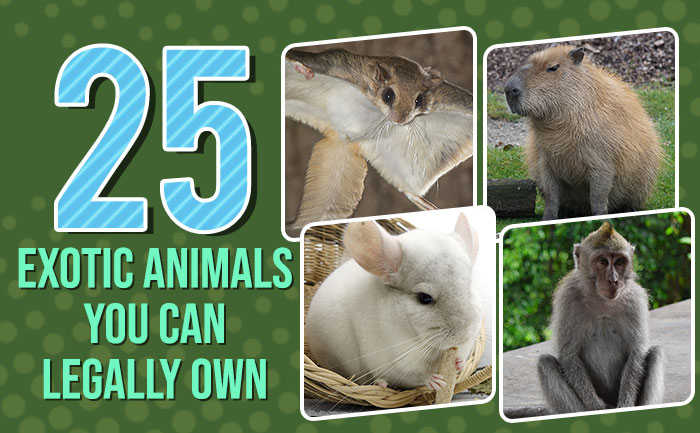 There is a bond shared between animals and humans since ages. This bond is at its strongest with your pets. We have heard about having cats, dogs, horses, rabbits being kept as pets. But there are many who love to have exotic animals as their pet. But as we know laws are too stringent to won an exotic animal. But today we are sharing with you some of the coolest exotic animals that you could legally own.

From Llamas to freshwater Stingrays here are some of the exotic animals you can legally own: The Dragon lizard is one of the exotic animals you can legally own. Despite their weird and scary looks, they are one of the gentlest reptiles,they love to be fondled and enjoy the occasional misty showers. As they are diurnals you can watch them when awake. They have good temperament and can even be handled by children but under supervision. They are usually kept in an aquarium. Naturally found in the Andes Mountains in South America, the Chinchilla is another exotic animal. It is prized for its beautiful soft lush fur and makes a good pet for a small family. They move quite fast and make good pets for teens. As they are fragile too tight a grip can easily hurt them.  9540937851 This exotic animal resembles both cat and dog. It is one of the coolest pet and can eat rodents, eggs, reptiles and insects. The Freshwater Stingray need very large aquariums. They are also sensitive to water chemistry and purity, so a frequent water change is a must. But they are a vision to behold as they glide in the water. 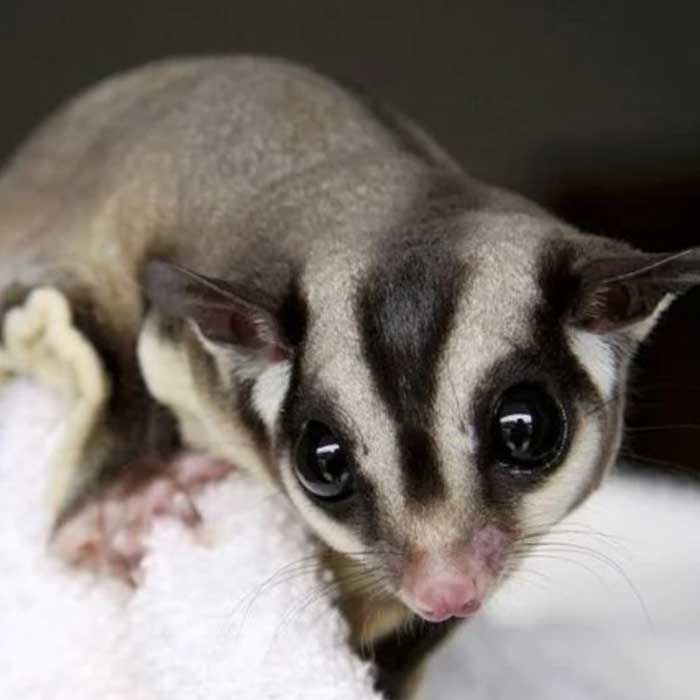 Native to Australia, Papua New Guinea, and Indonesia, the Sugar Glider is a cute little marsupial. They are one of the cutest exotic animals. They have become popular because they are very social and bond easily with humans. They are only 5” (13 cm) long and can easily glide through the air by spreading their legs. They are born in a pouch-like kangaroo. There many who love to keep fishes in tanks at home. But there are some who do not. Piranha is one such fish. They are also known as the wolves of the Waterworld. Piranhas love hunting live fish, though they also love worms and insects. However, piranhas do require maintenance, proving to be very messy eaters and not really the best pets for kids. A medium-sized African wild cat, this exotic animal is not for everyone. They are noted for their ears and spotted golden-yellow coat. It will take dedicated time and attention from their owner to develop a close bond. Boas are constrictors that mean they are large and non-poisonous and kill through strangling around their prey. Despite being weird exotic pets, they are quite popular animals among enthusiasts.

Boas tend to grow past the 5 feet mark, more depending on the species. Require a lot of space and high heat to est mimic their natural habitat. These exotic Anteaters are known for their pencil necked pointy faced cuddliness. The Tamandua’s tongue will be longer than expected. They are attention-seeking animals and show varying moods if neglected. This glider version of a squirrel love to run on their wheel. They make very good pets but if you really want to see them glide, let them climb high up and then see them glide to the next tree. A mini donkey is a very funny, comical and affectionate joy to own. They build lasting relationships with their owners for obvious reasons. But are very stubborn if not in the mood. They make good pets for kids due to their size and gentle nature. The Axolotl is a type of a salamander that originates from Mexico. The Axolotl can regenerate any part of its body in due time. They grow to be quite large and most often require specialized care. Genets are very cautious of their surroundings. It is a domestic wild animal and will not be found cuddling and entirely engaging. Genet is very independent in nature. Capybaras are in fact rodents, even though being very unusual pets, they are very social animals and love to work in groups. llama, they are like a mixture between a camel and a donkey. Llama’s make great pets as they can be very soft natured and make great companions. They show great manners and are very clean in nature. These miniature turtles are known for their gentle nature.
Their petite size and delicate nature is a reason why they are bought. The baby turtle requires constant care but once they are mature they are maintenance-free. They do however require the closeness of a water body for their daily swimming requirements. Wallaroo is a unique choice for an exotic pet. These marsupials are quite strong and very powerful. If they are hand raised from birth they forge a close bond with their owner.

The Hyacinth Macaw is the largest of the macaw species in the world and they are as affectionate as a human being.
The Macaw shows affection by cuddling with their owners. The macaw loves playing with toys and breaks them to smithereens. So be sure to keep many at hand. Naturally found in tropical waters worldwide, the Mantis Shrimp is one of the most fascinating exotic animals.They are quite demanding and need very specific living conditions. Mantis Shrimps are also capable of breaking through the tank wall with their powerful appendages. Hedgehogs are characterized by a prickly outer skin and are relatively shy creatures. Maintenance of these animals is fairly simple and involves regular cleaning of its cage and feeding. Native to Florida, the Blue Crayfish is one of the most popular and attractive freshwater crayfish species sold in the aquarium trade. They need clean water, plenty of hiding spaces and rather shallow fish tank with a large bottom area to hang around. The Potbellied Pig is an intelligent and affectionate animal that can make a good pet for anyone. They can be trained to walk on leashes, and need a lot of exercises as they often tend to become obese.

Monkeys tend to be very adorable and are often very cute looking. They are very intelligent animals. They grow quite demanding as they grow older.