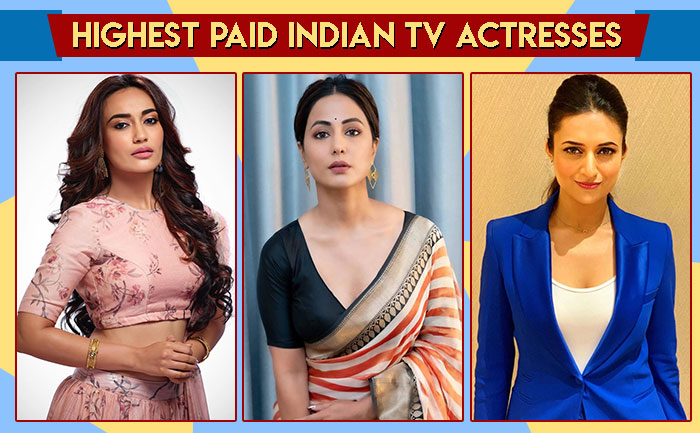 Highest paid Hindi TV actresses 2020: Indian Television shows are considered to be one of the biggest sources of entertainment for the audience. Nowadays, there are several Indian TV shows or serials are giving tough competition to the Hindi film industry. Yes, there are many TV actresses have gained global recognition due to the immense popularity of their shows. According to reports, many Hindi TV actresses are being paid far greater than several Bollywood actresses. Latest Hindi Serials BARC TRP Ratings

Yes, you read that right, in this article, we will be talking about 9 Indian highest-paid TV actresses of 2020. You must be wondering, how much popular TV actresses earn for a single episode or a show.  Without any further ado, let’s talk about the top 9 highest paid Hindi television actresses of 2020.

I want my body like my coffee, Hot And Strong ? what say ?

Hina Khan is one of the most popular faces of the Indian TV industry. The popular actress is known for her characters Akshara in Star Plus’s Yeh Rishta Kya Kehlata Hai and Komolika in Kasautii Zindagii Kay. Apart from acting, she participated in Salman Khan’s reality  TV show, Bigg Boss 11 and emerged as the first runner up in 2017.

Hina Khan was last seen in Hindi TV show, ‘Kasautii Zingadii Zay‘, which was one of the highest generating TRP shows of all time. According to reports, Hina Khan gets paid a whopping sum of 1.5 to 2 lakhs per episode.

A post shared by Divyanka Tripathi Dahiya (@divyankatripathidahiya) on Sep 9, 2019 at 2:49am PDT

Divyanka Tripathi is a popular TV actress, who made her acting debut in the TV industry for Doordarshan. She earned nation-wide fame and recognition with Zee TV’s drama fiction Banoo Main Teri Dulhann by playing the dual roles of Vidya, an orphan and illiterate girl, and Divya, a modern and literate girl.

Due to her outstanding acting, she won many awards including the Indian Television Academy Award for Best Actress in Drama Category and the Indian Telly Award for Fresh New Face. Divyanka Tripathi is currently known for playing the character of Dr Ishita Bhalla in Star Plus’s Ye Hai Mohabbatein. Besides acting, Divyanka Tripathi hosted several award shows and she has been a part of dance reality show-‘Nach Baliye 8’. She apparently charges a whopping amount of Rs. 80,000 to Rs. 85,000 per episode.

There’s sunshine in my soul today …and we’ll just leave it at that! Cheers, my dearies!

Jennifer Winget is one of the most beautiful and talented Hindi TV actresses. She is popularly known for her roles Kumud Desai in Saraswatichandra, Maya Mehrotra in Beyhadh and Zoya Siddiqui in Bepannah.

Jennifer Winget made her acting debut as a child actor when she was merely 12-year old in Raja Ko Rani Se Pyar Ho Gaya. Later, as an adult, she went on to work in scores of Indian TV shows. According to reports, earlier the actress was being paid Rs. 80.000 to Rs. 85,000 per episode but now her paycheck has been increased to Rs 1 Lakh per episode.

Surbhi Jyoti is one of the most sought after actresses of Hindi TV industry. Surbhi is well known for her roles of Zoya in Qubool Hai and Naagrani Bela in Naagin 3. She started her acting career with regional theatre and films.

Asha Negi is one of the most popular and talented Hindi TV actresses. She earned fame and recognition for her characters of her roles in the shows Pavitra Rishta as Purvi, Ek Mutthi Aasmaan as Kalpana, Kuch Toh Hai Tere Mere Darmiyaan as Koyal. Asha took part in the Indian dance reality show Nach Baliye 6 along with her partner Rithvik Dhanjani in 2014.

Negi began her career as a model in 2009 after she won the title of Miss Uttarkhand 2009 during her college days. Later she auditioned for her first TV show in 2010 with the Star Plus’ popular show Sapnon Se Bhare Naina playing the role as Madhura. Post her first TV show, she appeared on the Balaji Telefilms series Bade Achhe Lagte Hain, where she played the negative role, Apeksha Malhotra.

If we hanging out, just don’t kill my vibe… and we’re good??

Nia Sharma is undoubtedly one of the most popular Hindi TV actresses of recent time. She has worked in many Indian TV shows but popularly known for portraying the lead roles of Anu in Star Plus’s Kaali – Ek Agnipariksha, Manvi in Star Plus’s Ek Hazaaron Mein Meri Behna Hai, Roshni in Zee TV’s Jamai Raja and Aarohi Kashyap in Ishq Mein Marjawan.

Besides TV shows, Nia Sharma has also been a part of Fear Factor: Khatron Ke Khiladi in 2017 and web series Twisted. She was ranked second in the Top 50 Sexiest Asian Women 2017 list published by British-based Eastern Eye newspaper. According to reports, she takes home a sum of Rs. 75,000 to Rs. 80,000 for shooting a single episode.

Sakshi Tanwar is one of the most experienced and highest-paid Hindi TV actresses. She is known for her roles in Kahaani Ghar Ghar Kii and Bade Achhe Lagte Hain. Sakshi Tanwar debuted in Indian TV industry with Albela Sur Mela in 1998 but she rose to fame with her portrayal of Parvati Agarwal in the soap opera, Kahaani Ghar Ghar Kii. In December 2012, she made a second appearance on Amitabh Bachchan’s TV reality show Kaun Banega Crorepati.

She is the only TV actress who has always been in the list of top 10 actresses of the TV industry. Sakshi, who has hosted many reality shows such as ‘Crime Patrol’, ‘Code Red’ and ‘Tyohaar Ki Thaali’ reportedly takes home almost Rs. 1,25,000 to Rs. 1,50,000 per episode.

Krystle D’Souza is one of the most sought after actresses of Indian TV shows. She is known for her roles Jeevika Vadhera in Ek Hazaaron Mein Meri Behna Hai and Sakshi in Ek Nayi Pehchaan. D’Souza debuted her acting career when she was in college.

The actress had started her acting career with ‘Kahe Na Kahe’ in the year 2007, and later she appeared in several other shows. Krystle gained fame and recognition with ‘Ek Hazaaron Mein Meri Behna Hai’, which also featured Nia Sharma.

Talking about her remuneration, Krystle D’Souza apparently charges around Rs. 55,000 to Rs.60,000 for one episode.

Drashti Dhami is a well known Indian model and TV actress. She is popularly known for her portrayal of Geet in Geet – Hui Sabse Parayi, Madhubala in Madhubala – Ek Ishq Ek Junoon, and Nandini in Silsila Badalte Rishton Ka.

Now, Drashti has become one of the top actresses, who has a huge fan following across the globe. As per the buzz, Drashti charges around Rs. 65, 000 to Rs. 70,000 per episode.

These are the names of highest Indian TV actresses and how much they earn for a single episode. If you enjoyed reading this article, do not forget to share it with your FRIENDS!