Home > Entertainment > Jawaani Jaaneman Song Ole Ole 2.0: Saif Ali Khan is all set to take you to the ’90s 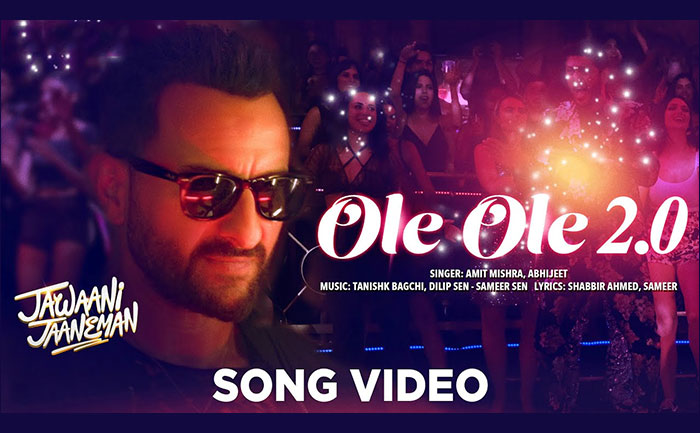 Saif Ali Khan is riding high on the success of his latest flick ‘Tanhaji: The Unsung Warrior.’ He will next be seen in comedy-drama ‘Jawaani Jaaneman‘ alongside Tabu and Alaya F. The trailer of the film was much loved by fans. After Gallan Kardi, the makers of the film have dropped second song titled Ole Ole 2.0.

In the video, we can see Saif waking up handcuffed to the bed and later dancing in a club with this song in the background. In the new Ole Ole 2.0 to be equally fun if not more than the original one. The original version had a much younger Saif romancing the girls. Speaking of this, The Nawab of Pataudi has recreated his old song from his 1994 film Yeh Dillagi.

Ole Ole 2.0  is sung by Amit Mishra and Abhijeet Bhattacharya and composed by Dilip Sameer and Tanishk Bagchi. The lyrics for the new song has been written by Sameer Anjaan and Shabbir Ahmed.

Talking about the movie, Saif Ali Khan plays the role of a playboy who wouldn’t change a thing about his life. He gets the shock of his life when a young woman appears at his door claiming to be his daughter and informing him that she is pregnant. How the father-daughter duo struggles to come to terms with their situation and how Saif comes to terms with his changing lifestyle.

The film is directed by Nitin Kakkar and marks the debut of Alaya Furniturewalla daughter of actress Pooja Bedi. It is produced by Jackky Bhagnani’s Pooja Entertainment in association with Saif’s Black Knight Films and Jay Shewakramani’s Northern Lights Films.