Kylie Jenner even changed her Instagram bio to "Rise and Shine." 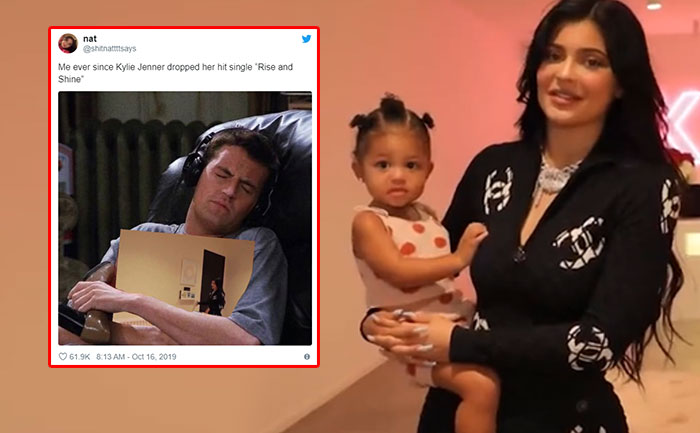 The makeup mogul Kylie Jenner recently uploaded a video on her YouTube channel of her giving a tour off her office space and right at the end of the video, Jenner enters into Stormi’s room to wake her from her nap by singing the words: “Rise and shine”  and showcase her singing skills.

Kylie’s two-second clip turned into an instant meme, the internet went crazy for it and the memes are unstoppable and to add more fun to the ‘Rise and Shine’ meme she updated her Instagram bio as well.

Take a look at the ‘Rise and Shine’ memes:

lolll someone actually did this 😂😂 #riseandshine #KylieJenner pic.twitter.com/UvwPSHkEzx

Stormi in the morning: pic.twitter.com/NUGr6w3Vn3

what did i do #riseandshine pic.twitter.com/cifRStoofX

Kylie Jenner also shared the ‘Rise and Shine’ meme on her Twitter handle. It looks like Jenner has been enjoying the memes as well.

The fact that Ariana Grande did the Kylie Jenner Rise and Shine is everything! 🤣🤣 #KylieJenner #ArianaGrande #riseandshine @KylieJenner @ArianaGrande pic.twitter.com/TlJFOqTe0p

Kylie Jenner shared this photo of herself using her own brand Kylie Skin’s tinted moisturizer alongside the caption: “Riiise and shiine✨

On the other note, Kylie Jenner and Travis Scott took a break from their relationship and there are rumors that they considering getting back together and they were last seen together at the premiere of Travis’s Netflix documentary ‘Travis Scott: Look Mom I Can Fly’ on August 28, along with Stormi Webster.