The most followed celebrities on Instagram in India has names of Priyanka Chopra, Deepika Padukone, Virat Kohli, Alia Bhatt and Salman Khan. 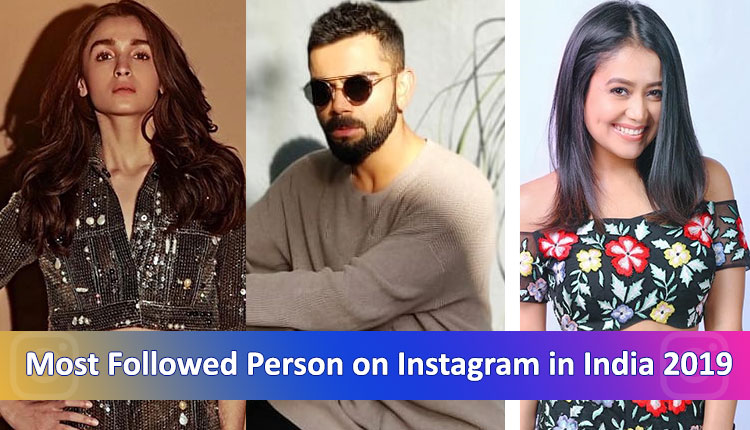 Bollywood celebrities, Politician, Corporate people and influential personalities seem to have preferred Instagram over Facebook in India. Yes, Instagram has finally emerged as one of the most popular social media platforms around the world. Do you know how popular Instagram has become in India? You would not believe, as of January 2019, more than 72 million active users were on the photo-video sharing application. India comes on number 2 after the United States of America when it comes to most Instagram followers. 10 Most Followed Instagram Celebrity In 2019

Seeing its rising popularity, celebrities in India do not leave any stone unturned to engage their fans and update their whereabouts on Instagram. After Facebook and Twitter, it is Instagram which is widely loved by people across the world. There are several people in India who have the maximum number of followers on Instagram such as Priyanka Chopra, Deepika Padukone, Virat Kohli, Alia Bhatt Shraddha Kapoor, Jacqueline Fernandez, Akshay Kumar, Anushka Sharma and Salman Khan. Here Are 10 Most Liked Pictures On Instagram Of All Time

In this article, we will be talking about the most-followed personality on Instagram in India. Yes, the list a bit long but you will be shocked to see the followers counts of these Indian artists. Without any further ado, let’s take a look at the list below.

Under the Tuscan ☀️ #teampixel 📷: @nickjonas

Who does not follow Priyanka Chopra on Instagram? PeeCee is not only the most followed Indian celebrities on Instagram but also among the World’s top 50 most-followed people in the world. Priyanka who has recently tied the knot with American singer Nick Jonas has 44.6 million followers on Instagram. Talking about who she follows, she only follows 469 people as of now. Priyanka is at number 48 in the list of 50 most-followed accounts on Instagram as of April 2019.

Notably, The Government of India honoured her with country’s fourth-highest civilian award, Padma Shri in 2016 and in the same year, she was named as 100 most influential people in the World by Time magazine.

Virat Kohli is undoubtedly one of the best Indian cricketers we have ever seen. Yes, he is currently leading India cricket team and doing well as a captain. The Indian skipper is one of the most followed cricketers on Instagram, who has dozens of brands in his kitty. His Instagram account timeline is filled with him and his beautiful wife Anushka Sharma’s pictures. Virat currently has 41.1 million followers on Instagram but follows only 101 people including some brands such as Audi.

Yet another Bollywood actress, Deepika Padukone has more than 30 million followers on Instagram. As of today, Padmaavat actress has 38.9 million followers on photo-video sharing application. Deepika had tied the knot with her longtime boyfriend Ranveer Singh last year. Deepika Padukone follows merely 104 people on Instagram. She was once named as the country’s most popular personalities and Time named her as one of the 100 most influential people in the world in 2018.

The Bollywood diva Alia Bhatt, who made her Bollywood debut with Student of The Year in 2012, has become one of the most sought actresses of B-Town. After delivering a successful movie Raazi in 2018, she has already given us two best movies including Gully Boy and Kalank. Bhatt is one of the highest-paid Hindi film actresses. She has appeared in Forbes India’s Celebrity 100 list since 2014 and was featured by Forbes Asia in their 30 Under 30 list of 2017. Talking about Alia Bhatt’s Instagram followers, she has 37.2 million followers and only follows 489 people.

The teaser is out on June 13th! #SAAHO #15thAugWithSaaho @actorprabhas @sujeethsign ❤️🖤

Shraddha Kapoor, who is currently gearing up for her upcoming film Saaho. She is an avid social media user, who keeps sharing pictures and videos from the sets of films and vacations. Shraddha is known for her beautiful smile and that could be the reason she has 34.5 million followers on Instagram. Her Instagram timeline has a mix of casual pictures of her daily life and movie promotions. Shraddha only follows 364 people on the photo-sharing app.

Jacqueline Fernandez, who is a Sri Lankan born-Indian actress and former Miss Universe Sri Lanka, made her acting debut in Bollywood with Aladin 2009. Following her Bollywood debut, she has delivered several hit movies and worked with big actors including Salman Khan. She is also known as the Jacq of hearts in India. Owing to her beautiful face and commendable skills, she also managed to have a huge fan base on Instagram. Yes, Jacqueline Fernandez has 32.7 million followers on Instagram and she follows 816 people.

There is no doubt Akshay Kumar is the leading actors of Bollywood, but on Instagram he the list of most followed Indian celebrities on Instagram are being ruled by women. Akshay Kumar, who is known for his versatility and playing characters ranging from comedy, action and drama has 27.8 million followers on Instagram. Akshay only follows five people on Instagram which includes his beautiful wife Twinkle Khanna or Rajyavardhan Rathore.

Bollywood diva Anushka Sharma, who was last seen in the Hind film Zero alongside Shah Rukh Khan and Katrina Kaif has not yet announced her next project. Anushka is an avid social media user, who does not shy posting her picture with hubby Virat Kohli to with her fans on Instagram. Anushka Sharma has 28.1 million followers on the photo-sharing app and follows only 168 people. Apart from having several awards on her name, she was named by Forbes Asia in their 30 Under 30 list of 2018.

Neha Kakkar, who has been in the new for her break up with Himansh Kohli. She is one of the most sought singers of recent time. Yes, she competed on season 2 of the television reality show Indian Idol in 2006 and was a judge on the tenth season of the same show i.e. Indian Idol 10. She launched her first album, Neha-The Rock Star and the music was composed by Meet Bros in 2008. Neha Kakkar Hits 25 Million Followers On Instagram

Neha Kakkar is an avid social media user, who continues to share pictures and videos on Instagram as she enjoys a huge fan base. Talking about Neha Kakkar’s Instagram follower, she has 27.2 million followers on Instagram. She only follows 169 people.

TAKE THE PAST, AND MAKE IT YOURS. INTRODUCING THE 2019/20 @ARSENAL AWAY KIT, EXCLUSIVELY AVAILABLE THROUGH ADIDAS. @ADIDASFOOTBALL #CREATEDWITHADIDAS #DARETOCREATE

The heartthrob of Bollywood, Ranveer Singh, who is currently busy getting trained for his upcoming film 83 is one of the most successful actors of recent time. Yes, Ranveer is known for delivering successful movies one after another. After Padmvaat and Simmba in 2018, Ranveer has already delivered one best in 2019. He does not leave any stone unturned to engage his fans on Instagram and that could be the reason he has 26.8 million fans on the photo-sharing app and follows 518 people.

Apart from having received three Filmfare Awards, Singh is among the highest-paid actors in the country and was featured in Forbes India’s Celebrity 100 list since 2012.

The Bhaijan of Bollywood, Salman Khan is currently busy promoting and sharing his looks from Bharat on social media. Yes, like always, Salman has already booked his Eid-release as well. Apart from having listed on most followed Bollywood celebrities on Instagram, he has a significant following in Asia and the Indian diaspora worldwide and is cited in the media as one of the most commercially successful actors of both world and Indian cinema. Talking about Salman Khan’s Instagram follower, he has 26.3 million followers on Instagram. Sallu only follows 8 people on Instagram.

According to the Forbes 2018 list of Top-Paid 100 Celebrity Entertainers in the world, Khan was the highest-ranked Indian with 82nd rank with earnings of $37.7 million.

These are 10 most-followed people on Instagram in India. The list of celebrities or people who have the maximum number of followers on Instagram will be updated from time to time and it was last updated on 4th January 2020.