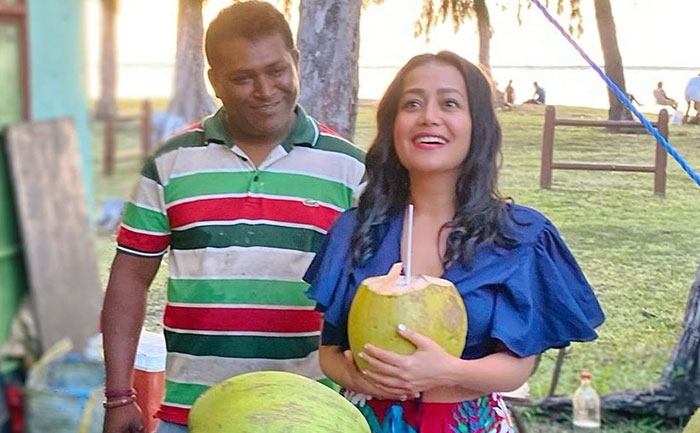 The wedding hoax of Neha Kakkar and Aditya Narayan has finally come to end as Neha has acknowledged that they pretended it all to boost the TRP of the reality TV show, Indian Idol 11. In an interview, Neha Kakkar has revealed that Aditya Narayan will tie the knot last this year with his long time girlfriend.

Praising the host of Indian Idol 11 and extending her good wishes to Aditya, Neha said, “Aditya is a very beautiful person. He has a heart of gold and I am really happy to share that my dear friend is getting married this year with his long-time girlfriend. I wish him all the happiness and many years of togetherness.”

Days later, Neha Kakkar shared a photo of a man selling coconut water in Mauritius and praised him. While sharing the photos, she wrote a caption which will surely cause heartache to everyone who has a crush on her.

Every Girl should have a Guy in her life who Looks at her the way This #NariyalPani wala bhaiya Looking at Me! ☺️😄🥰 . . #Mauritius 🏖 #NehaKakkar #NehuDiaries

Neha Kakkar wrote on Instagram, “Every Girl should have a Guy in her life who Looks at her the way This #NariyalPani wala bhaiya Looking at Me!”

Neha’s Instagram post has instantly received approval from her sister Sonu Kakkar and brother Tony Kakkar. Commenting on her post, Sony wrote, ‘Awww’ and Tony commented,  “You so pretty and Caption ek number.”

Post her wedding hoax, Neha Kakkar has recently been in the news for threatening her ex-boyfriend Himansh Kohli to stop using her name for cheap fame or else she will expose her family’s Karma. Neha’s threat came after Himansh, who had told a newspaper that he was wrongly projected as the ‘villain’ after his break-up with Neha.