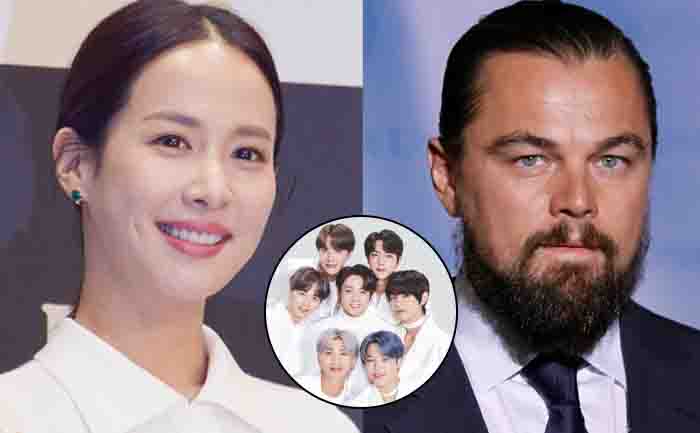 BTS is a seven-member boy band by Bighit Entertainment. It consists of members RM, V, Suga, J-Hope, Jungkook, Park Ji-min, and Jin. The BTS boys have a humongous fan following all over the globe. They are followed not only by the common man but also celebs such as John Cena, Simon Pegg, Cardi B and many more. Now a new name is added to the long list. He is none other than Hollywood star Leonardi DiCaprios.

Parasite actress revealed that Hollywood star Leonardo DiCaprio is also a part of the BTS ARMY. She added that they both bonded over BTS at the 92nd Academy Awards.

Cho Yeo Jeong recently appeared on an episode of Saturday Nigh Live Korea. During a segment, she revealed, “Leonardo caught me on a brief moment right before we went up to the stage to be awarded. He congratulated me on the win. I asked him if he knows BTS. He said he likes ‘Blood, Sweat, Tears.’”

Fans soon reacted to her revelation and tweeted,

to be more specific this was at the oscars & leonardo congratulated her & the parasite cast for winning an award & she asked in response if he knew bts pic.twitter.com/UvYDVSjHlC

On the work front, the BTS boys are all set for their concert of the year titled, ‘BTS PERMISSION TO DANCE ON STAGE’. This is the group’s first official concert of the year. It will be held at SoFi Stadium, Los Angeles on November 27 and 28, and December 1 and 2.

How To Enable WiFi Calling On Android And iPhone? Step By Step Guide