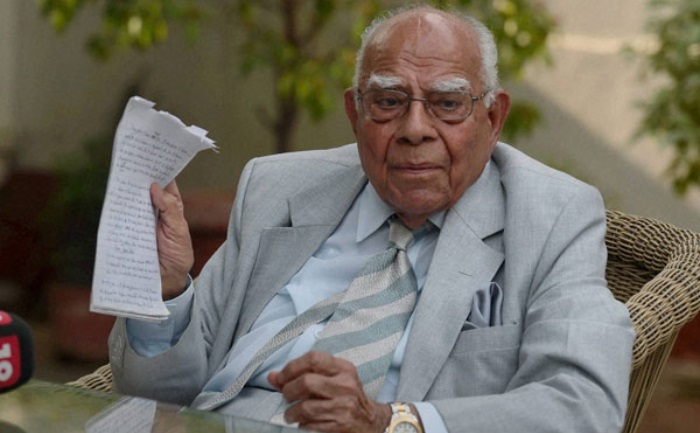 Veteran criminal lawyer and former Union Minister Ram Jethmalani passed away at his residence in Delhi. He was 95 years old and had not been keeping well for the last few months. According to reports, the lawyer had been on round-the-clock medical support over the past week.

Mr Jethmalani, a six-time Rajya Sabha member, served as a Union Minister in the United Front and NDA governments. He joined the BJP-led NDA ministry in 1998 and then again in October 1999. However, he quit the Atal Bihari Vajpayee government in July 2000. Mr Jethmalani had also served as the chairman of the Bar Council of India. He was one of the highest-paid criminal lawyers in the country. Jethmalani is known for his cases such as

Ram Jethmalani was born on September 14, 1923. He completed school at the age of 13 after getting a double promotion. He then joined Bombay University and obtained his LLB degree at the age of 17.  He challenged  a law which stated that the minimum age for becoming a lawyer was 21. Later was allowed to begin practising at the age of 18 in his hometown Shikharpur, Bombay Presidency, British India (now in Sindh, Pakistan). After the partition, he migrated to Mumbai and set up his practice there.

He is survived by his son, noted lawyer Mahesh Jethmalani, and a US-based daughter. His other daughter Rani Jethmalani died a few years ago.

As reported by PTI, Mahesh Jethmalani said his father’s last rites will be performed in the evening at Delhi’s Lodhi Road crematorium.