Ranu Mondal was recently trolled for the terrifying make-up 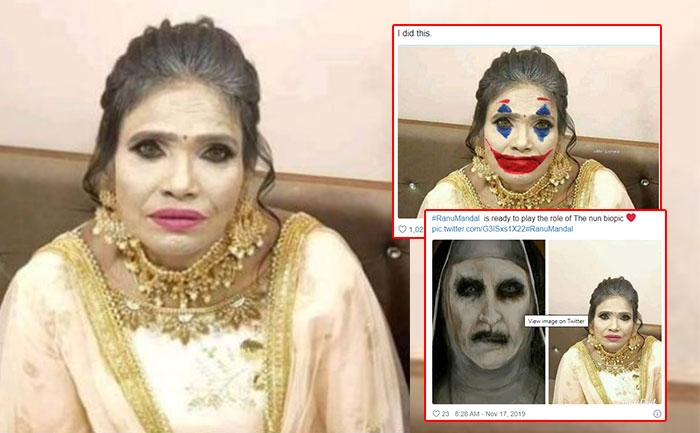 Ranu Mondal who became a huge singing sensation a couple of months earlier was lately trolled for her latest make-up photos on the internet. One of her make-up picture came out on social media and it has been breaking the internet ever since then.

The singer got make-up done all over her face which made the netizens create memes as they couldn’t deal with the picture nicely. Ranu Mondal was made fair in the make-up and she couldn’t have been possibly recognized by anyone. The make-up artist made her extremely fair. To this, the users on the social media trolled her by creating memes. They were also others who slammed the make-up artist for having done such absurd make-up. Check out the memes below.

At present, Ranu Mondal has joined the music composer and singer Himesh Reshammiya once more to recreate a new version of a popular song Ashiqui mein teri from the year 2006 for the film Happy Hardy and Heer whereas this song called as Ashiqui mein teri 2.0 had been released on Thursday, November 14.

It was not long ago, when Ranu broke the internet again as a video appeared online all over the social media. In the video, the singer got annoyed with a fan of her who had touched her for a selfie. She gave instructions to the fan saying not to touch her.

For the unversed, Ranu Mondal used to sing at a railway platform at Ranaghat Railway Station. There, someone made a video of her and shared it on the social media which eventually became viral.