17 Tallest Bollywood Actresses And Their Heights in Feet, Meter or CM 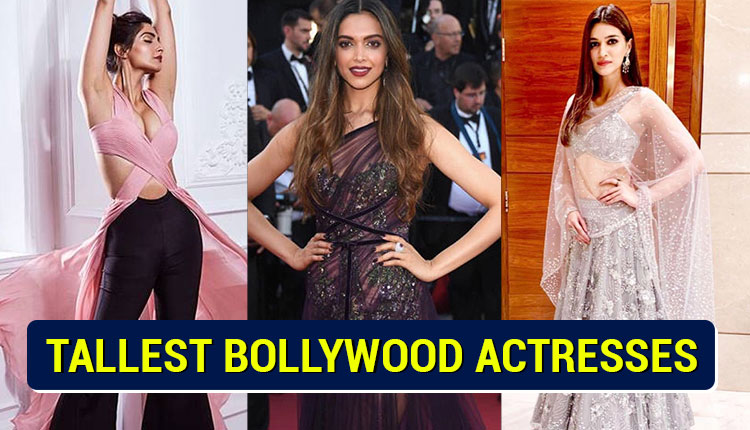 Gone are days when short size heroines were considered to be lucky for Bollywood films. Now, the tinsel town is being ruled by almost all the tallest Bollywood actresses including Sonam Kapoor, Katrina Kaif, Diana Penty and several others. We all know height does not matter in the Hindi film industry and the only thing that matter is talent. People are searching on Google, who is the tallest actress in Hollywood or in the world? In this article, we will be talking about 17 tallest actresses in Bollywood. Bollywood Actresses Without Makeup Pictures

Here is a list of 17 Tallest actresses in Bollywood

The daughter of Bollywood actor Anil Kapoor, Sonam Kapoor, who tied the knot with a businessman Anand Ahuja last year is known for embracing new fashion every day. Sonam made her Hindi film debut in 2007 with Sanjay Leela Bhansali’s romantic film Saawariya, now she is a recipient of several awards including a Filmfare and a National Film Award.

Apart from being one of the highest paid actresses of B-Town, she comes at number one in the list of tallest Bollywood actress. Sonam Kapoor’s height is 1.79 m or 5. 11″ in feet.

The Cocktail fame ‘Diana Penty’ looks drop-dead gorgeous due to her height and beautiful face. Her acting skills in the debut film had garnered praise and earned her a nomination for Filmfare Award for Best Female Debut. Following her debut in Bollywood, she went on the star in Lucknow Central (2017) and the action film Parmanu: The Story of Pokhran (2018). Apart from movies, she is quite an active star endorser for many brands including TRESemmé and Nokia. Diana Penty’s height is 1.78 m height and 5.70″ in feet.

Bollywood actress Sarah Jane Dias is a former beauty queen and the winner of Femina Miss India 2007. When she was 21-year old, she won a talent hunt TV show which paved her way to host a Channel V show. Following that she became the host of Get Gorgeous, a supermodel hunt TV show on the network. Do you know, she was also featured in the music video for Australian rock group named INX’S “Never Let You Go”.  She also appeared in the Hindi movies Kyaa Super Kool Hai Hum opposite Ritesh Deshmukh in 2012 and in O Teri opposite Pulkit Samrat in 2014. Sara Jane Dias’s height is 1.78m and 5.83″ tall in feet.

Katrina Kaif is British actress, who made her acting debut in Hindi film industry in 2003 with ‘Boom’. She has been in the industry for more than 15-year. Over the period of time Katrina has established herself as one the most attractive female actresses. She did not take her height as a hurdle and now she is among the highest paid actress in the tinsel town. Katrina Kaif’s height is 1.74 m or 5.8 1/2 in feet.

Lisa Haydon is an Australian actress, who has appeared in several Bollywood movies. She made her debut with romantic comedy Aisha which earned her fame. Her role in Comedy garnered wide recognition and a Best Supporting Actress nomination at Filmfare. Lisa Haydon’s height is 1.78 m or 5.80″ in feet.

Anushka Shetty’s real name is Sweety Shetty. She is an Indian actress who mainly works in the Telugu film Industry. She has received many awards including three CIneMAA Awards, one Nandi Award,  TN State Film Awards and three Filmfare Awards from eight nominations. She made her acting debut with Super in 2005 which earned her Filmfare Best Supporting Actress. Anushka Shetty is one of the tallest actresses in Bollywood, whose height is 1.78 m and 5.83″ tall in feet.

Anushka Sharma who tied the knot with Indian skipper Virat Kohli in 2017 is one of the highest paid actresses of B-town. She was last seen in Anand L Rai’s ‘Zero’ which also featured Katrina Kaif and Shah Rukh Khan. Anushka has several awards on her name including a Filmfare Award. She was once featured by Forbes Asia in their 30 Under 30 list. She made her debut alongside Shah Rukh in successful romantic film ‘Rab Ne Bana Di Jodi’. Apart from her acting, she is known for her well-curved body and tall height. Anushka Sharma’s height is 1.75 m height or 5.80″ in feet.

Kriti Sanon made her acting debut with Telugu blockbuster thriller 1: Nenokkadine in 2014. Talking about Bollywood debut, she made with Sabbir Khan’s ‘Heropanti’ in 2014 opposite Tiger Shroff. Over a period of only five years, Kriti has carved space for herself in the film industry. She is still riding high on the success of her latest release ‘Luka Chuppi’ which also features Kartik Aaryan in the lead role. Kriti Sanon’s height is 1.76 m or 5. 77 in feet making her more beautiful and attractive.

Nicole Faria is an Indian actress hailing from Bangalore, who won the Miss Earth 2010. According to Wikipedia, she is a brand ambassador of several brands which includes Clean & Clear. Notably, she received an award from President of India, Ram Nath Kovind for being the first Indian woman to have won the title of Miss Earth 2010. She has also been honoured as the FIrst Ladies of the country for their pioneering achievements after an extensive research process made by the Ministry of Women and Child Development of India. She made her acting debut as a leading actress in Yaariyan in 2014. Nicole Faria’s height is 1.75m and 5.74″ tall in feet.

Nargis Fakhri, who was last seen in Amaavas, is an American actress. Fakhri made her acting debut with a leading role in Imtiaz Ali’s romantic drama Rockstar in the year 2011. It should be noted that her debut film was the first ever film in India, which showcased a Kashmiri Pandit wedding, and saw Fakhri as a free-spirited rich brat, hailing from the Kashmiri Pandit background. Nargis Fakhri’s height is 1.75 m and 5.74″ tall in feet.

Twice i would die, for a little more once with you ??? . . . . . Photographer- @prabhatshetty Hair and make up- @vijaysharmahairandmakeup Outfit- @dolcegabbana Styled by- @d_devraj @d_squaddd #portraitphotography #portrait #floraldreams #dolcegabbana #eyes

Sonal Chauhan is popularly known for her role in Jannat, which earned her fame and recognition. Apart from Bollywood, she works in Telugu movies. She has received several beauty contestants. Talking about Chauhan’s unknown facts, in 2005, she was crowned as the Miss World Tourism at Miri, Sarawak state of Malaysia. Do you know that she is the first Indian to have claimed Miss World Tourism title? Sonal Chauhan’s height is 1.75 m and 5′ 74″ tall in feet.

#throwbackthursday back to the time when I was a single lady ! #putaringonit ? . #throwback #saree #ring #single #past #present #motherhood #family #future #pregnancy #baby #momlife

Always choose to #communicate ?❤️not just for others to know you better, more importantly, for you to know yourself!!!?? yes, #silence is also a way to communicate, choose its timing wisely!!? As for words, speaking your mind could well be an act of grace, not the lack of it!! ?❤️ such is the power of #sharing #toolsofexpression #languageofgrace ?❤️??I love you guys!!!

Sushmita Sen, who has not appeared in Hindi films from quite a time was crowned Femina Miss India Universe in 1994 at the age of 18. She is an avid social media user and known for her well-toned body. She does not leave any stone unturned to give us a major fitness goal on social media. It was Sushmita Sen who is the first Indian woman to have won the beauty pageant award.

Sushmita made her acting debut in Bollywood with Dastak in 1996 but her first commercial success was Tamil musical Ratchagan (1997). Sushmita Sen’s height is 1.75 m and 5.74″ tall in feet.

Neha Sharma is an Indian actress, who made her acting debut with Telugu film Chirutha in 2007. Her first Bollywood film as a leading actress was released in 2010. Her role in highly appreciated film Kya Super Kool Hai Hum earned recognition. Neha Sharma’s height is 1.75 m and 5.74″ tall in feet.

The Mastani of Bollywood actor Ranveer Singh, Deepika Padukone is one of the most popular actresses in India. Apart from the tallest actress in Bollywood, she comes in the list of highest paid actresses. The world’s popular magazine TIME name Deepika one of the 100 most influential people in the world in 2018. She made her acting debut with Om Shanti Om opposite superstar Shah Rukh Khan in 2007. Deepika Padukone’s height is 1.74 m and 5.70″ tall in feet.

We all wait with eager eyes for discounts and flat 50% offs to buy our clothes. While people think twice before eating a slice of cheese-laden pizza, there is not even a second spared to think about the clothes we buy and wear – what was used to make them, are they natural or synthetic and effects they have on us, our loved ones and our environment. Being a mother and fitness enthusiast, I constantly wonder what my clothes are made of and how are they affecting me. If chemicals in cosmetics and lotions we apply on our skin are absorbed by our body, why would chemicals used to treat synthetic fabrics and clothes not? While we are slowly adopting a more conscious and natural lifestyle with what we eat and expose ourselves to, this change is yet to take over our wardrobes. It’s time for that change! It is the need of the hour for someone to stand up and take charge. It is time to go 100% natural. Stay tuned to this space for more. #100PercentNatural #NaturalWayOfLife #TheWillToChange #NaturalClothing #BackToBasics

Shilpa Shetty, who has worked in dozens of Bollywood movies, is popularly known by her married name Shilpa Shetty Kundra. Besides Hindi movies, she has worked in Kannada, Telugu and Tamil language films. Shetty is the recipient of numerous accolades, including four Filmfare Award nominations. Shetty made her acting debut with Baazigar in 1993 which earned her nominations for the Filmfare Awards for Best Supporting Actress and Lux New Face of the Year. She is a fitness enthusiast and has a tall height which makes her more beautiful. Shilpa Shetty’s height is 1.74 m and 5.70″ tall in feet.

Zareen Khan made her silver screen debut as a leading actress in 2010’s period drama Veer opposite Bollywood superstar Salman Khan. She has worked in Tamil, Telugu and Punjabi film but she mainly works in Hindi films. For her performance in Veer, she earned her nomination from the Zee Cina Award for Best Female Debut. She rose to fame with a dance number ‘Character Dheela’ in Ready, which turned out to be the blockbuster movie of 2011. Zareena Khan’s height is 1.74 m tall and 5.70″ in feet.