The Forgotten Army Out: How To Watch Online & Download Free

The Forgotten Army - Azaadi Ke Liye streaming on Amazon Prime Video: Here's how to watch online and download for free 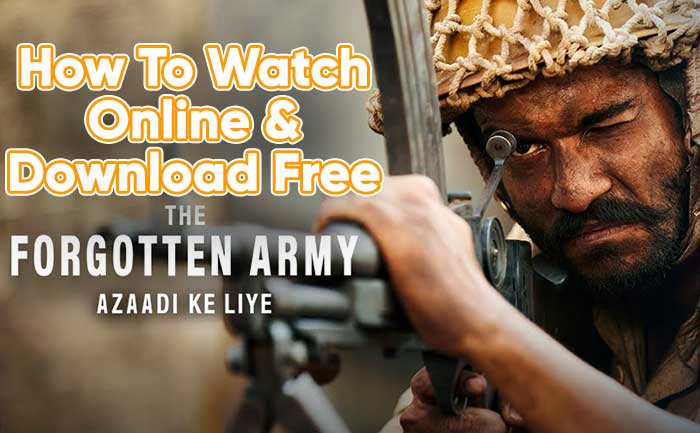 In this article, we will talk about everything about The Forgotten Army from its plot, cast, number of episodes, trailer, its sequel and how to watch online and download it from Amazon Prime Video. Without any further ado, let’s take a look.

The story is based on the true story of Indian soldiers who sailed towards the capital, with the war cry ‘Challo Dilli’, to free their country from the reign of the British. The Indian National Army (INA), which was forged out of British defeat in Singapore during WWII, was led by the charismatic Netaji Subhash Chandra Bose and had the first ever women infantry regiment anywhere in the world.

While these soldiers including men and women bravely fought against the British army to free India, their struggle and story somehow got lost and they became ‘the forgotten army’. With the love story between two soldiers – Sodhi and Maya at the heart of it, the series poses several questions about identity, independence and the idea of motherland and the cost of freedom. Freedom, that we often take for granted but freedom that costs countless lives and sacrifices. Fighting to keep freedom alive is often more difficult than fighting to gain freedom.

When is The Forgotten Army out on Amazon Prime Video?

How many episodes are in The Forgotten Army Season 1?

The first season of The Forgotten Army has five episodes in it and all of them are currently streaming on OTT platform. The title of each episodes are as follow:

How to watch online and download Amazon Prime Video’s The Forgotten Army?

The much awaited web series The Forgotten Army season 1 is now streaming on Amazon Prime Video. First of all you must know that only Prime users can watch and download The Forgotten Army Season 1 as it is Amazon Original series. Yes, this web series is not available on any other OTT platform such as Netflix, Hotstar and others.

In order to watch The Forgotten Army, what all you have to do is to sign up to Amazon Prime. If you have already subscribed Amazon, you can watch it on Amazon, but if you do not have its subscription, you can also watch it for free as Amazon provides a 30-day free trial.

Who is in the cast of The Forgotten Army

Is there a trailer for The Forgotten Army?

Yes, the makers of the series uploaded the trailer of The Forgotten Army Season 1 on January 7, 2020. You can watch the trailer below.

Will there be The Forgotten Army Season 2?

The web series has received positive response from both critics and audiences but the makers of the film is yet to announce whether they will come up with The Forgotten Army season 2 or not. All we can do is to wait and watch until the official announcement is made.

Also Read: Inside Edge Season 2 Out: How To Watch Online & Download Free

Saffron Health benefits: Here’s how Kesar is good for the body