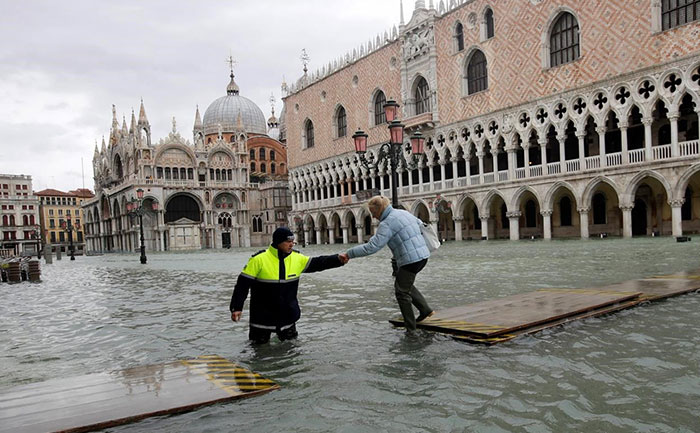 Venice known for its historical buildings, paintings, churches, canals, and gondolas is facing the threat of global warming. But it seems that after the recent historic flooding it is in danger of losing its status as a UNESCO World Heritage site. Venice suffered heavy damage when floodwaters reached one of the highest levels in more than 50 years this month.

The city has one of the highest concentrations of famed art and architecture in the world, according to the heritage center’s website. Its 118 small islands and lagoon were designed a World Heritage Site in 1987.

UNESCO representatives have warned that Venice could lose its status as a World Heritage Site if it does not adequately protect itself from worsening flooding. They have even offered help after recent inundations.

Director Mechtild Rössler Director of the World Heritage Centre told the Thomson Reuters Foundation that climate change, tourism management, and erosion are all threatening the integrity of the historic city. He further added that, “Key buildings which are within the World Heritage area are threatened … this is of great concern to us, especially as this is not a single incident.”

Venice suffered heavy damage when floodwaters reached one of the highest levels in more than 50 years this month.

UNESCO first granted Venice World Heritage 32 years ago, but tourism has soared in the years since while the local population has continued to decline.

As reported by SUN, Venice welcomes 22 million tourists a year, while only around 55,000 people actually live there, down from 175,000 in 1951. They say Venice is both sinking into the mud and facing rising sea levels due to climate change. The city’s Moses flood defense project is still not operational despite nearly two decades of construction.

Five billion euros of public funding has already been used for the underwater barrier system that was supposed to be working by 2011. Critics say the project has been plagued by corruption, cost overruns, and prolonged delays. Engineers now predict the sea defense system will be ready at the end of 2021, at a cost of 5.5 billion euros ($6.1 billion). The project’s original estimated cost was 1.6 billion euros ($1.8 billion).