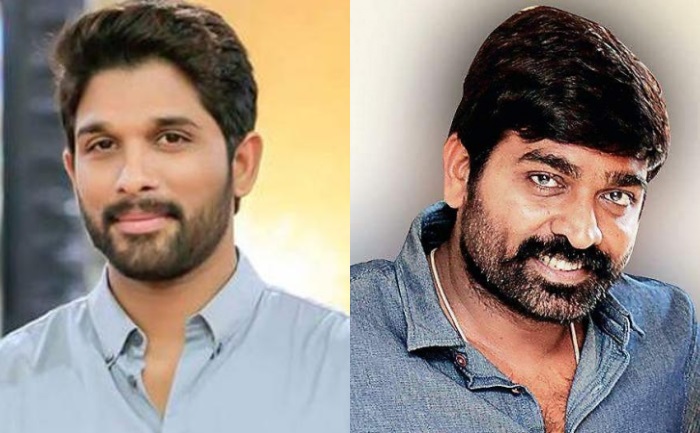 Vijay Sethupathi is on a roll ever since he played a villain in megastar Rajinikanth’s hit flick Petta. The actor has also managed to impress the Telugu audience with his extended cameo in Megastar Chiranjeevi’s Sye Raa Narasimha Reddy. He has already signed a Tollywood film titled Uppena with actor Panja Vaisshnav Tej. He is also roped in to play an antagonist in South star Allu Arjun’s next flick.

Vijay Sethupathi has been finalized to play the antagonist in Allu Arjun’s upcoming film with Rangasthalam director Sukumar.

As reported by a source to Indian Express, “Vijay Sethupathi has become choosy about the films he tackles. The storyline narrated by Sukumar has impressed him and he has agreed in principle to work in the film. The duo will soon catch up for a detailed narration to find common ground over several aspects.”

The source told the daily, “Sukumar has done a location recce in Nallamala forest to find exactly the right locations for the shoot and currently, the art department is busy with the set work. The team is determined to begin the shooting before the New Year.”

The film is tentatively titled AA 20 and is based on red sand smugglers set in the backdrops of Rayalaseema and Nellore. Rashmika Mandanna has been signed to play the leading lady.

Fans are excited about the collaboration and eagerly looking forward to seeing Vijay Sethupatgi in Allu Arjun’s 20th film.

On the work front, Allu Arjun is happy with the response to his recent flick Ala Vaikunthapurramuloo. The movie os on a reaping spree at the box-office.

Also Read: Sri Reddy hits out at Allu Arjun once again: Its original hair or wig?