On the occasion of Children's Day, we present to you 12 childhood pictures of the B-Town celebrities. 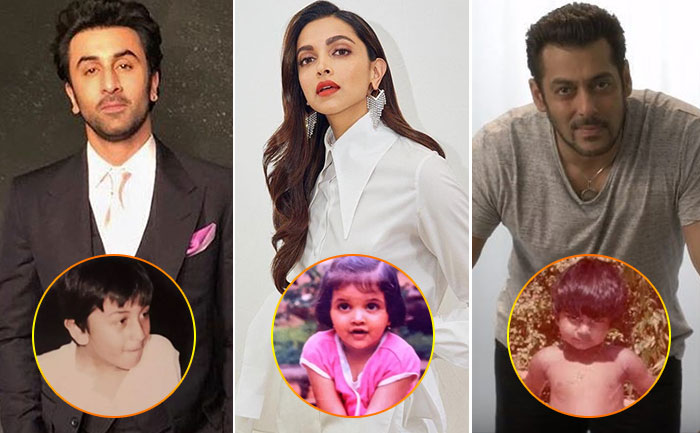 It’s Children’s Day today and it is celebrated on the occasion of Independent India’s first Prime Minister late Jawaharlal Nehru’s birthday, as he loved children dearly. He always said that as children are the future of the nation they should be nurtured carefully.

On the occasion of Children’s Day, we bring to you unseen and rare childhood photos of Bollywood celebrities. The superstars of the Bollywood are idolized, loved for being who they are. Since their childhood, they’ve been able to melt the people around them with their adorable looks. But, you might not be able to recognize what some of these big names of Bollywood used to look like.

We bring to you 12 rare photos of Bollywood celebrities during their young age.

Alia Bhatt is born on 15th March 1993 born in Mumbai. Mahesh Bhatt is of Gujarati descent and Soni Razdan is of Kashmiri Pandit and German ancestry. The director Nanabhai Bhatt is her paternal grandfather.

Ranveer Singh Bhavnani is born on 6 July 1985 in Bombay to Anju and Jagjit Singh Bhavnani and is among the highest-paid actors in the country. Singh married Deepika Padukone in 2018. Deepika Padukone was born on 5 January 1986 in Copenhagen, Denmark to Konkani-speaking parents. Her father, Prakash Padukone, was a former professional badminton player and her mother, Ujjala, was a travel agent. In 2018,  Padukone married Ranveer Singh in Italy. Ranbir Kapoor born on 28 September 1982 in Bombay to Rishi and Neetu, both actors of the Hindi film industry. Kapoor is the great-grandson of Prithviraj Kapoor and the grandson of actor-director Raj. Salman Khan born on 27th December 1965, is the eldest son of screenwriter Salim Khan and his first wife Sushila Charak. Khan was the highest-ranked Indian with 82nd rank with earnings of $37.7 million

King Khan is born on 2nd November 1965 to a Muslim family in Delhi, India. He married Gauri Chibber, a Punjabi Hindu, in a traditional Hindu wedding ceremony on 25 October 1991. In 2008, Newsweek named SRK as one of their fifty most powerful people in the world. The Nawab of Pataudi was born on June 16th, 1970. Their paternal grandmother was Sajida Sultan, Begum of Bhopal and their great-uncle was Pakistani general Sher Ali Khan Pataudi. Khan was married to his first wife, Amrita Singh, for thirteen years, after which he married the actress Kareena Kapoor.

Kareena Kapoor Khan is born on 21 September 1980 is an Indian actress who appears in Hindi films. She is the daughter of actors Randhir Kapoor and Babita. Kareena is married to Saif Ali Khan. Bollywood’s Desi Girl is born on 18th July 1982 in Jamshedpur to a physician couple in the Indian Army and the winner of Miss World 2000. Priyanka is married to the American singer and actor Nick Jonas. Born on 2nd June 1987 in Patna, Bihar. Earlier, she worked as a costume designer, later, Sinha made her Bollywood debut with Dabangg opposite Salman Khan. Sonam Kapoor is born on 9th June 1985 in Bombay suburb of Chembur. Kapoor is known for her outspoken personality, she is frequently credited as one of India’s most fashionable celebrities. She is married to the businessman Anand Ahuja.