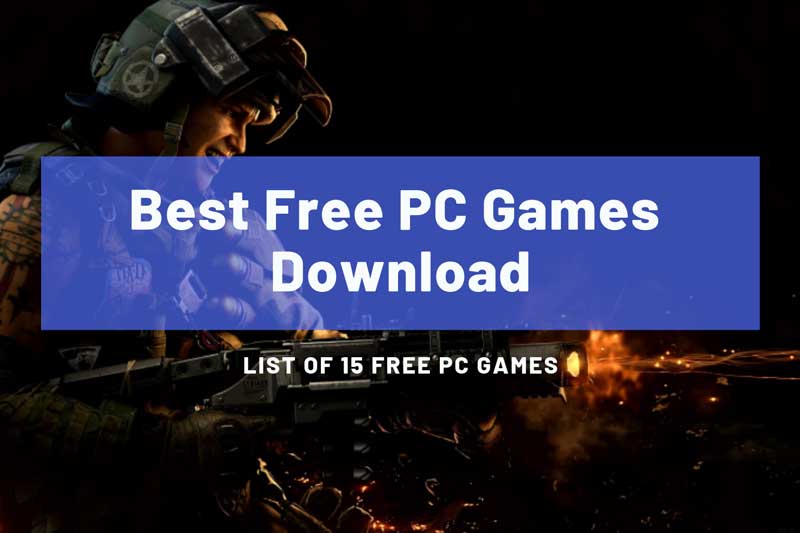 Looking for free full games for PC then in this articles you can find top Free To Play Games for the year 2019. Downloads are provided from official sources and there are no pirated games in the list. Almost all games part of Free to Play like Apex Legends free download, PUBG free download, Stars Wars The Old Republic free download from stores like Origin and a lot more others from Steam. Top 10 Best Survival Games On PC You Must Play In October 2019

The list as 15 free PC games downloads from Steam, Origin and Windows Store. To download full version install Steam or Origin Client in your system and it also requires basic signup.

Apex Legends is arguably one of the most popular video games on PC developed by Respawn Entertainment and published by Electronic Arts. The game was first released for Microsoft Windows, PlayStation 4 and Xbox One on 4th February 2019.

Asphalt 9: Legends is a popular racing PC video game developed and published by Gameloft Barcelona and Gameloft respectively. Notably, it is the ninth installment in the Asphalt series. Unlike its previous parts, developers seem to have improved a lot in in 9th part. They have bunch of new features in Asphalt 9: Legends such as a prestigious car lineup, new control schemes, including the autopilot mode called Touch Drive, and race modes, and the reimplemented “shockwave nitro” from Asphalt 6: Adrenaline.

3) Batman: The Enemy Within – The Telltale Series: Download for PC

Batman: The Enemy Within is an action-adventure game developed and published by Telltale Games and distributed by Warner Bros. Interactive Entertainment under its DC Entertainment label. The game is said to be a sequel to 2016’s Batman: The Telltale Series, which was based on Bob Kane and Bill Finger’s Batman character.

Dota is a multiplayer online video game developed and published by Valve Corporation. The is a second installment of Defense of the Ancients (DotA) series. The game is played in matches between two teams of five players, with each team occupy and defend their own separate base on the map.

During the match, players gather experience points and items for their heroes to successfully defeat the opposing team’s heroes in player versus player combat.

How can we forget Fortnite when we are talking about best PC games. It is an online video game developed by Epic Games and released in 2017. There are three distinct game mode of Fortnite is currently available on the internet. The first two games were released in 2017 while the third Creative mod was dropped in December last year.

This PC video game has been divided into three main modes for ground, air, and naval forces. In air battles, the battles are strictly air forces without helicopters. For naval battles, the navy can be combined with the air forces. Aircraft are in every mode of rewarded play.

World of Warships is a free to play naval warfare-themed multiplayer online video game published and produced by Wargaming. Apart from random battles against others, players have an opportunity to fight battle against bots or an advances PvE battle mode. For the most skilled players, two seasonal competitive modes are available.

Candy Crush Saga is only only one of the most popular PC games but mobile games as well. The puzzle video game was released by King on 12th April 2012 for Facebook; other versions for iOS, Android, Windows Phone, and Windows 10 were released later. It is a variation of their browser game Candy Crush.

In the game, there are multiple goals that must be completed within a fixed number of moves or limited amount of time, such as a certain score or collecting a specific number of a type of candy.

Ludo King is one of the best and free to play mobile and PC games developed by Indian Studion Gametion Technologies PvT Ltd. Gametion is owned by Vikash Jaiswal. The game is a modernization of the board game, Ludo, which in turn is based on the ancient Indian game of Pachisi.

The PC Game Ludo King was first released on 20th February 2016 on the Apple Store and it has been ranked no1 in the most download android games.

Ludo King was first released on February 20, 2016 on the Apple App Store, and is ranked No 1 in the Top Free Games Section.

Modern Combat, which is also known as Combat 5: Blackout developed and published by Gameloft Bucharest and Gameloft. It is the fifth installment in the popular video game series Modern Combat. The fifth installment of Modern Combat was released in July 2014 for iOS, Android, Windows Phone 8, Windows 8.1 and BlackBerry 10, on October 24, 2018 for Steam, and for Nintendo Switch on February 14, 2019. Do you know it is the first game in the series that is developed by Gameloft Bucharest?

Star Wars: The Old Republic is a multiplayer online video game based in the Star Wars universe. The game is developed by BioWare Austin and supplemental team at BioWare Edmonton. The announcement of launching the game was made on October 21, 2008.

This PC video game was released for the Microsoft Windows platform on December 20, 2011 in North America and part of Europe. The Early Access to the Star Wars was made available a week before its official release on 13th December 2011.

Sniper Fury is also a popular online video games developed and published by Gameloft. The game revolves around mechanics common for most sniper games, where the player has to finish a great majority of his targets from long distance

Command & Conquer (C&C) is a real-time strategy (RTS) online video game developed by Westwood Studios. This video game has full-motion video cutscenes with a notable ensemble cast to progress the story, as opposed to digitally in-game rendered cutscenes. The studio and some of its members were absorbed into EA Los Angeles, which continued development on the series.

Counter Critical Strike is 3D FPS action game in counter strike style. Critical strike is for FREE now! From the Desert Eagle to AK47 and AWP sniper, you have access to a variety of light and heavy weapons, and even grenade! Answer the call of duty, pick up the weapons and fight alongside with your friends! Intercept, eliminate and extract. It’s time to engage the enemy!

Lord of the Rings Online came out in 2005 and was developed by Turbine, Inc. It is a massively multiplayer online role-playing game released for Microsoft Windows and OS X. The game won the PC Game of the year at the Golden Joystick Awards in 2007. The game is set in the picturesque world of J.R.R. Tolkien’s Middle-earth and takes place in the same time frame as The Lord of the Rings.

Developed and published by Blizzard Entertainment, Hearthstone is a free-to-play online digital collectible card game. The game is based upon the lore of the Warcraft series. It was released in 2014 and is a turn-based game between two opponents.

Dauntless is a free-to-play action-role play video game developed by Phoneix Labs. The game was released on September 26, 2019 for Windows, PlayStation 4 and Xbox One. Dauntless is set in a post-apocalyptic world where monstrous creatures known as Behemoths are prying on the surviving humankind. Players hunt down these Behemoths to collect loot which can be used to craft and upgrade weapons and equipments.

Paladins: Champions of the Realm is a free-to-play online first-person shooter game developed by Evil Mojo Games. Paladin offers several different game modes with each mode offering its own unique set of maps with their own play style, rules and objectives.

Brawlhalla is a free-to-play 2D platform fighting game. The game was developed by Blue Mammoth Games and released in 2015. Brawlhalla recently introduced WWE superstars into its ranks with the likes of “Macho Man” Randy Savage, John Cena, Roman Reigns, The Undertaker, Asuka and many more.

For more free Games you can visit Steam and Microsoft Store.