These are the 10 highest-paid Hollywood actresses of 2019 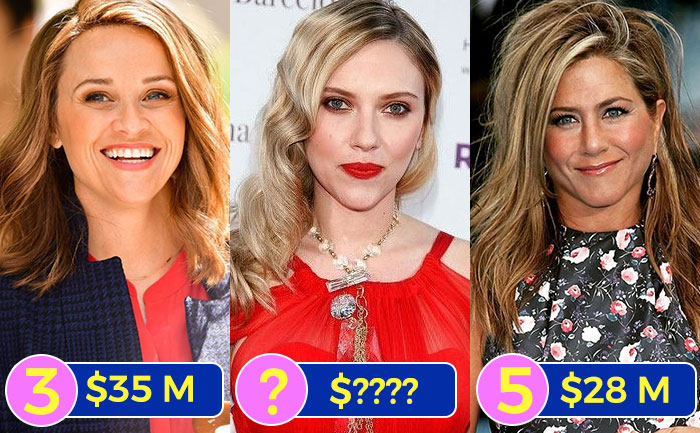 The hefty amount that she earned within a year includes a lot of Marvel money that she got for a solo Marvel film or an eight-figure check for her upcoming Black Widow and an impressive back-end payment of about $35 million for the $2.8 billion-grossing Avengers: Endgame. Highest-Paid Actors 2019

The list of top 10 highest-paid Hollywood actresses has four new faces including Elisabeth Moss, Margot Robbie, Sofia Vergara and Reese Witherspoon. Collectively, the world’s 10 highest-paid actresses earned $314.6 million between June 1, 2018, and June 1, 2019, before fees and taxes. The amount is reportedly 69% more than last year’s cumulative total but still way less than the 10 actors who collectively earned $588.3 million during the same period.

In this article, we will only be talking about the top 10 highest-paid actresses of 2019. The amount we have mentioned in this article is based on data from Nielsen, ComScore, Box Office Mojo and IMDB, as well as interviews with industry insiders. Top 9 Highest-Paid Indian Television Actresses Of 2019

Note: All figures are pretax; fees for agents, managers and lawyers (generally 10%, 15% and 5%, respectively) are not deducted.

Did you catch my announcement on The Ellen Show? I want to visit a wildlife sanctuary with you! We’ll get lunch, learn about the animals & more. Click the link in my bio or go to omaze.com/ellen to enter. ❤️?

Ellen Kathleen Pompeo is an American actress, director and producer. She is one of a few Hollywood actresses who have signed $20 million annual contracts with the American Broadcasting Company in late 2017 for her on-going role in Grey’s Anatomy.

The Grey’s Anatomy star has proved that TV is not dead yet. If the report is to be believed, she takes home almost $575,000 per episode to star in and produce the ABC hit show.

London you never disappoint. Thank you for an amazing night xx #LongShot

Charlize Theron is a South African-American actress and producer. She is a recipient of several accolades, including an Academy Award, a Golden Globe Award, and the Silver Bear for Best Actress. The beautiful actress was named in the list of Time’s 100 most influential people in the world in 2016, and she is one of the world’s highest-paid actresses, as of 2019.

Notably, It is her production company, Denver and Delilah Productions, which produced 2019 film Long Shot and Netflix series Mindhunter.  She is all set to team up with Nicole Kidman and Margot Robbie in the December film Bombshell.

Margot Elise Robbie is an Australian actress and producer. She has received a nomination for an Academy Award and three BAFTA Awards. The leggy lass was named in the list of Time’s 100 most influential people in the world. She is also considered to be one of the highest-paid actresses in the world.

On the professional front, Margot Robbie will produce Birds of Prey as well as reprise the role of Harley Quinn and for that, she is demanding Eight-figures amount. Birds of Prey is slated to hit the theatres in 2020.

Elisabeth Singleton Moss is an American singer and actor. She is popularly known for her work in several television dramas, earning such accolades as two Primetime Emmy Awards and two Golden Globe Awards leading to Vulture to name her the “Queen of Peak TV”.

On the professional front, Moss will star in Wes Anderson’s upcoming film The Invisible Man, which also features Oliver Jackson-Cohen and Storm Reid. The film is scheduled to hit the theatres on March 13, 2020.

Kaley Cuoco is an American actress and producer. After working in numerous movies and TV shows as a side actress in the 1990s, she got lead role as Bridget Hennessy on the ABC sitcom 8 Simple Rules, on which she starred from 2002 to 2005.

The gorgeous actress featured as Billie Jenkins on the final season of the television series Charmed (2005–2006). Cuoco starred as Penny on the CBS sitcom The Big Bang Theory (2007–2019) and for which she received Satellite, Critics’ Choice, and People’s Choice Awards.

Until The Big Bang Theory ended, Cuoco was a part of the highest-paid cast on network television, earning $900,000 per episode.

"Beauty attracts the eye but personality captures the heart." ? Fans ! Check the link in the bio to buy Exclusive F.R.I.E.N.D.S Merchandise. Grab it before it is gone!

Jennifer Aniston is an American actress, producer and businesswoman. She is known for her role in popular TV show FRIEND and for which she earned Primetime Emmy, Golden Globe, and Screen Actors Guild awards. Jennifer Aniston is a daughter of John Aniston and Nancy Dow, she started her career in acting when she was quite younger. Nowadays, she is one of the top 10 highest-paid actresses in Hollywood.

On the professional front, The Friends star is making her comeback on TV, starring in producing Apple TV+’s The Morning Show. Aniston co-founded the production company Echo Films in 2008.

Great way to kick off #TIFF19 with #TheGoldfinch and people I love ✨ Last night was so much fun.

Nicole Kidman is an American actress and producer and a recipient of numerous awards including an Academy Award, two Primetime Emmy Awards, and five Golden Globe Awards. She was named in the list of highest-paid actresses in the world in 2006 and 2019. In 2018, Time magazine named her one of the 100 most influential people in the world.

You should know that apart from acting, Kidman has been a Goodwill Ambassador for UNICEF since 1994 and for UNIFEM since 2006. The talented actress was appointed Companion of the Order of Australia in 2006. Since she was born to Australian parents in Hawaii.

After wrapping up season two of Big Little Lies, Kidman will next be seen in Bombshell and The Goldfinch.

I call this series “the joy of carbs” ? @themorningshow

Reese Witherspoon is yet another American actress, producer and businesswoman. She is also a recipient of several accolades, including an Academy Award and a Primetime Emmy Award. Reese Witherspoon got the third position in the list of highest-paid actresses of 2019. The popular Hollywood actress was named in Time’s 100 most influential people in the world in 2006 and 2015.

Witherspoon has her own production company named Hello Sunshine, under which she has produced many movies including the thriller Gone Girl and the drama Wild (both 2014). Besides working or producing movies, she serves on the board of the Children’s Defense Fund (CDF) and was named Global Ambassador of Avon Products in 2007.

On the professional front, she will nest produce, upcoming film Lucy in the Sky and Truth Be Told.

Sofia Vergara is a Colombian-American actress. She is one of the most talented and beautiful actresses who has achieved a lot in her acting career. Sofia became popular while co-hosting two television shows for Spanish-language television network Univisión in the late 1990s.

Her first notable role in English was in the film Chasing Papi (2003) followed by she worked in many movies including Four Brothers (2005), and Tyler Perry’s Meet the Browns (2008) and Madea Goes to Jail (2009) and received an ALMA Award nomination for the latter.

Scarlett Johansson is the highest paid Hollywood actress of 2019. Yes, she has topped the list with her earning of $56 million. Scarlett Johansson is an American actress and singer, has been listed on numerous occasions in the Forbes Celebrity 100. The beautiful actress is a recipient of several awards, including a Tony Award and a British Academy Film Award.

Johansson has been married twice, to the Canadian actor Ryan Reynolds from 2008 to 2011 and the French businessman Romain Dauriac, with whom she has a daughter, from 2014 to 2017.

These are the names of 10 highest-paid Hollywood actresses of 2019. If you liked this article, do not  forget to share with your FRIENDS. Stay tuned for more such updates.