Katy Perry has found herself a new gal pal in Jacqueline Fernandez!

Katy Perry was joined by Bollywood actress Jacqueline Fernandez at the press conference to celebrate her first performance in India. 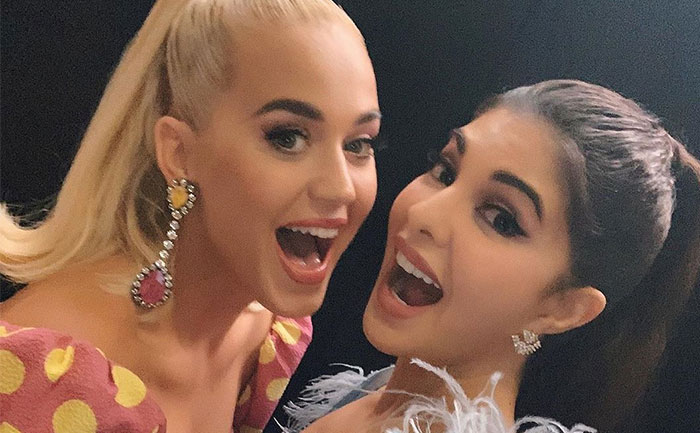 Pop Star Katy Perry is all set to perform in Mumbai on Saturday as a part of the OnePlus Music Festival. The American singer made her first appearance at a press conference for the upcoming concert.  She was joined by ‘Kick’ actress Jacqueline Fernandez.

During the press conference, while interacting with Jacqueline Fernandez, Katy Perry admitted that she has found a new gal pal in Jacqueline and that the two gorgeous girls will be spending a lot of time shopping and dining and having a gala time together!

The duo looked absolutely stunning, Perry wore a pink and yellow polka-dotted dress with puffy sleeves. The ‘Roar’ singer completed her look by wearing furry sandals and for hair, she tied a high ponytail, whereas, Jacqueline also opted for a snazzy look as she wore a blue ensemble with feathery textures on her top and a neat skirt.

Jacqueline Fernandez is one of the most influential personalities not only nationwide but globally as well and a testimony to the same is Jacqueline being loved and admired by the likes of international sensations like Katy Perry.

Jacqueline took to her Instagram and shared a selfie with the ‘Roar’ singer, with the caption, “With the diva herself! @katyperry 💖 Are you guys ready for Nov 16th? #oneplusmusicfestival 💃🏻”

With the diva herself! @katyperry 💖 Are you guys ready for Nov 16th? #oneplusmusicfestival 💃🏻

On the work front, Jacqueline was seen last in ‘Drive’ along with Sushant Singh Rajput which was released on Netflix. The actress will also star in Salman Khan’s ‘Kick 2’ which will be directed by Sajid Nadiadwala.

ALSO READ: Katy Perry Arrives In Mumbai Ahead Of Her First Concert