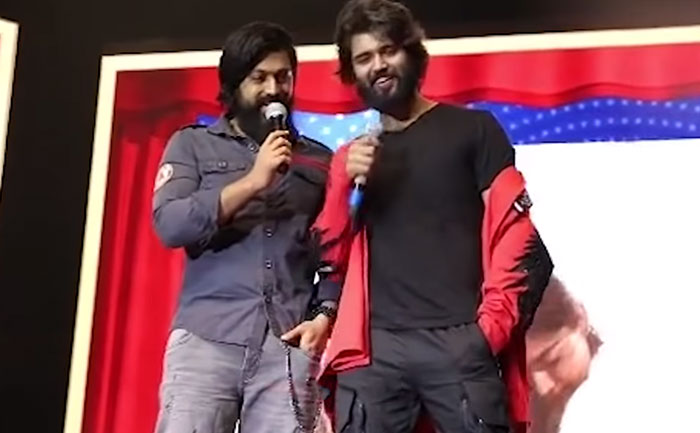 Yash and Vijay Deverakonda are both self-made superstars that have had very similar journies. While Yash made his feature film debut in 2008’s Moggina Manasu for which he won the Filmfare Award for Best Supporting Actor, his breakout role was in 2013’commercially successful Googly. On the other hand, Vijay Deverakonda made his debut in 2011 with Ravi Babu’s romantic comedy Nuvvila (2011), though he gained recognition with his supporting role in Yevade Subramanyam (2015).

Today, both Yash and Vijay Deverakonda are commercially viable names that are associated with box office successes such as KGF and Arjun Reddy. Well recently the two got together and we had an adorable moment where the KGF star Yash was seen teaching World Famous Lover Vijay Deverakonda a very popular dialogue from his film. The crowd loved the interactive moment. Check out this moment in the video below:

On the work front, Yash is arriving on the screens with K.G.F: Chapter 2. The film is scheduled to be released in July 2020. The first KGF film was a massive box office success. It collected over 250 crores to become the highest-grossing film in the Kannada industry. The star has also hinted that he might be interested in foraying into politics.

Vijay Deverakonda will next be seen in Puri Jagannadh’s Fighter alongside Ananya Panday. His last project World Famous Lover, which released on Valentine’s Day, has received mixed reviews from critics and audiences alike.

We hope these two superstars collaborate on a project soon. It will be a dream come true for the fans.