Check out the list of top 25 most dangerous dog breeds in the world such as Boxer, Husky, Bull Terrier and many more 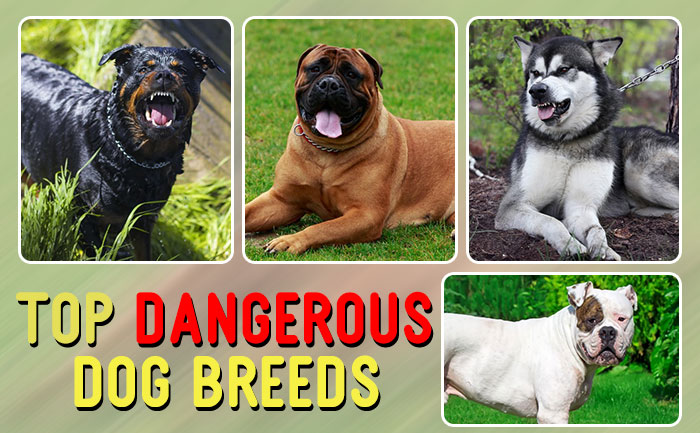 The bond shared by dogs and humans is truly one of the most magical moments experienced by many around the globe. The bond was formed since the beginning of the domestication and dogs went on to be an integral part of the human world. Dogs are intelligent creatures blessed with guarding abilities, protect livestock, and are loyal to their owners. They are also used by military, customs and police personnel in sniffing out harmful or hazardous products. They also help in nabbing criminals. But there are certain most dangerous dog breeds too.

Dogs have also been described as Man’s Best Friend, all thanks to their ability to interact with humans and their loyalty towards them. They not only protect their owners from harm but give them a sense of security. But not all dogs are calm and friendly. There are certain most dangerous dog breeds that need an iron hand to control their wild urges. Although these extreme cases are rare, it is still important that we are aware of the dangers and responsibility of having dogs.

Here is a list of 25 most dangerous dog breeds in the world:

Caucasian Ovcharka, this dog can grow very large, the minimum weight of a Caucasian Shepherd is around 50kg or 110 lb. for an adult male. Their life span average is of 10-12 years. This breed originated from Russia and other European countries. They were originally used as a guard dog for protecting livestock in mountain regions. These dogs are even feared by some popular wild predators such as wolves. They are one of the most dangerous dog breeds in the world. 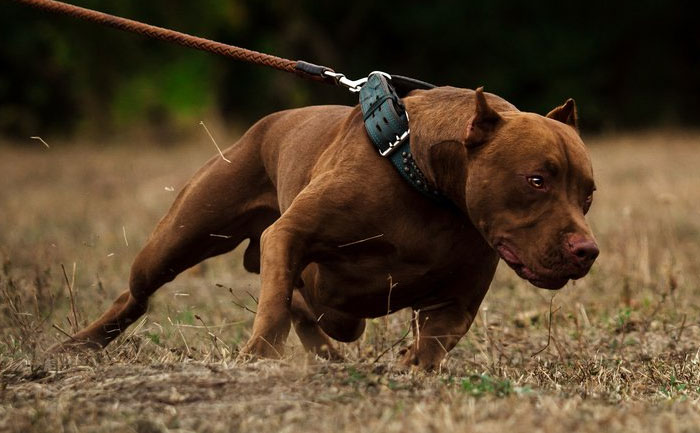 A very popular breed of strong dogs and are accountable for most of the attacks on humans. They have immense energy and agility prowess that makes them quite formidable. They are very popular for Dog Fights around the world, as they are trained to fight onto death. These dogs are banned in many countries as they are the maximum cause of dog attacks. To prevent their aggressive outbursts, they are required to undergo several extensive and training exercises. They are also the most dangerous dog breed. 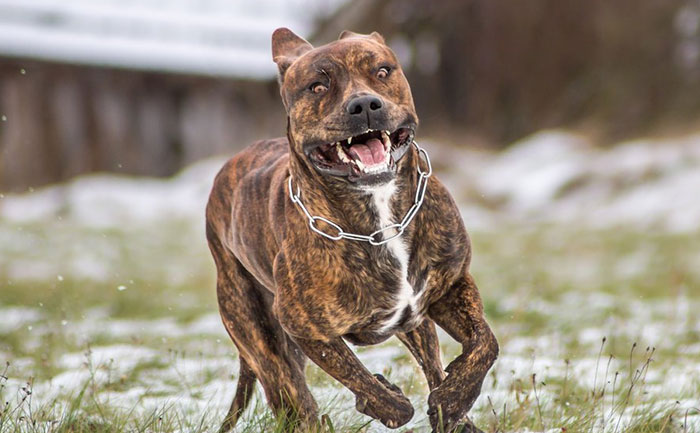 Perro de Presa Canario or Canarian Catch Dog is strong-willed and dominant dogs. They are usually used as farm animals. But due to a combination of several breeds of fighting dogs. There are rumours that like the Pit Bull, this breed is also used in deadly dog fights. They too are quite aggressive and need an Iron hand to control them. 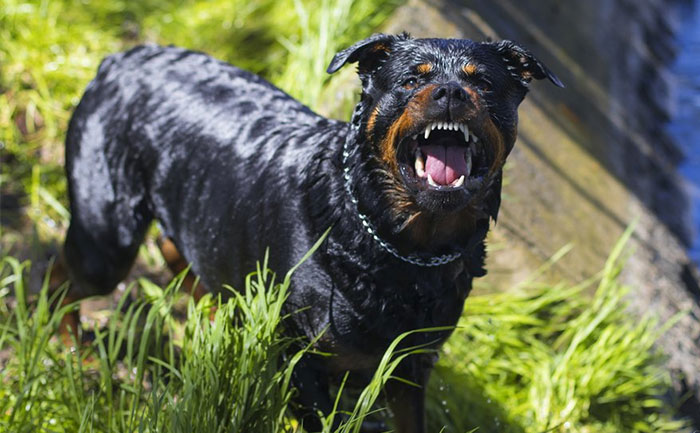 A breed of dog that is well-known for its fearsome reputation. These dogs are one of the oldest breed herding farm animals. Rottweilers are very intelligent and aggressive by nature. Almost half of the death caused by dog attacks in the US are reported to be caused by them. 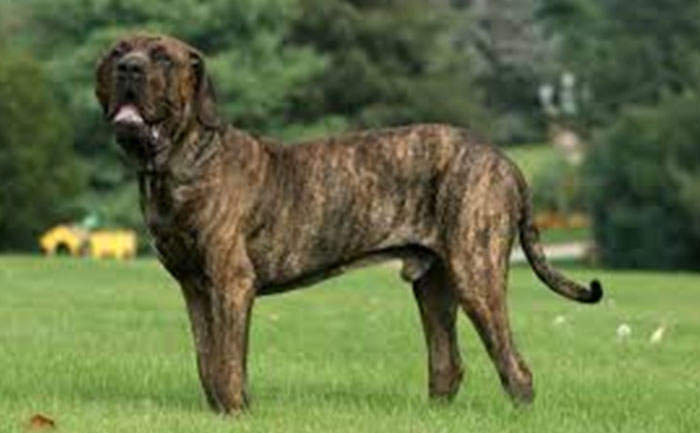 Aka the Brazilian Mastiff, are one of the largest breeds of herding dogs that originated in Brazil. They make for excellent guard dogs but requires experienced owners. Very aggressive and protective, these dogs are feared due to their uncontrollable behaviour and many instances of fatalities caused by their attacks have been reported. 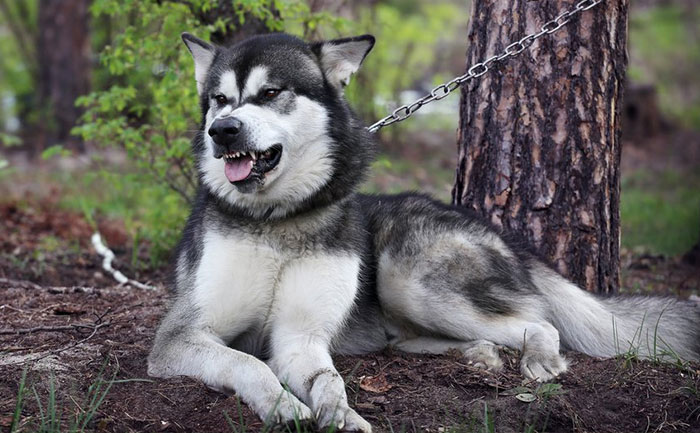 They were originally used as sledge dogs and are used to carry heavy loads, this popular Arctic breed is one of the largest domesticated dogs that can grow up to 100 lbs. They are capable of surviving extreme climates. Malamutes are a natural hunter and can even kill large predators such as bears. 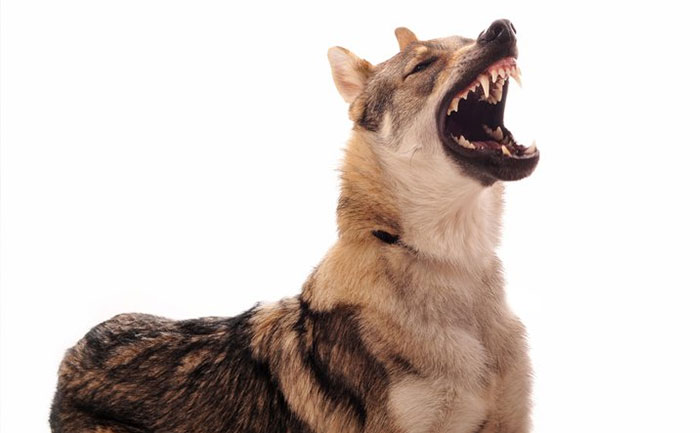 This breed is a mixture of domesticated dogs and wild wolves and one of the most feared dogs. These beasts have protective instincts and can be very wild due to their unpredictable behaviour. This is due to the breeding of wild animals with common dogs. In some countries, owning and breeding this dog is prohibited. 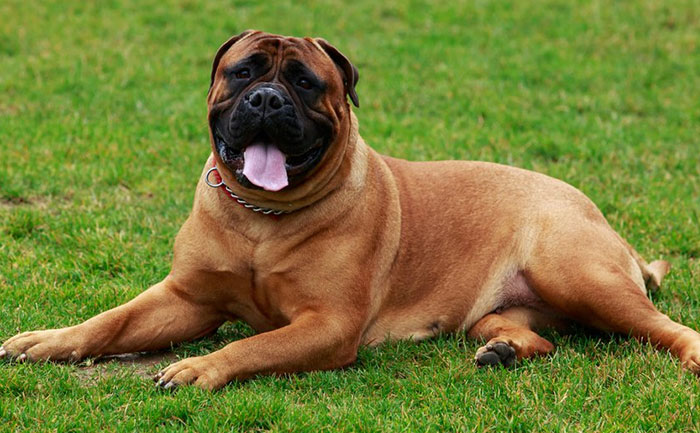 Bullmastiffs are powerful, strong and solid-built dogs. Very sensitive with immense guarding abilities. These dogs are dependable and efficient when it comes to security. With consistent training, these dogs become very dependable and obedient. But as they need someone strong to handle them, there are many incidents of attacks that even resulted to fatality. They are also the most dangerous dog breeds of the world. 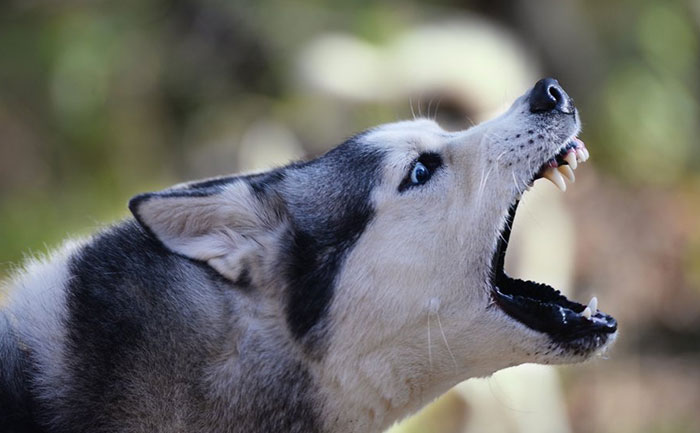 A popular breed of domesticated dog, Huskies originated as sledge dogs in the Northern regions. Extremely agile, with thick coats and unique colour patterns and striking facial mask added with special blue eyes they are prefered by the rich and the famous. They are closely related to Malamutes and are noticeably resembling wild wolves. Some cases reported are Huskies working with their pack attacking humans. 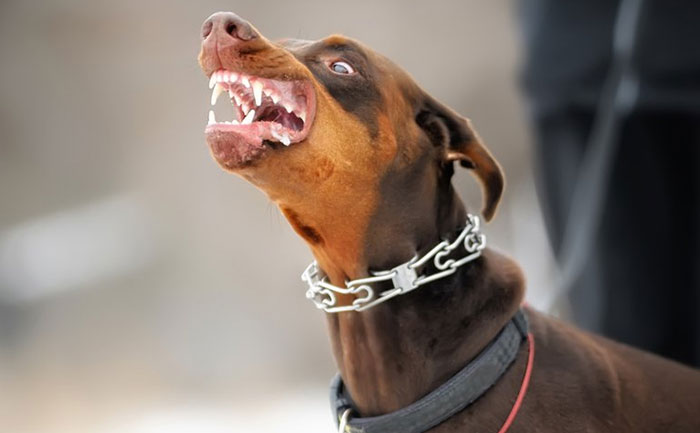 Famous for their agility and tracking abilities, these breed of intelligent dog makes the perfect guard. However, they too require a closely monitored training with consistency and patience. Doberman Pinschers are very capable of killing humans. They are a very sensitive breed and can be very aggressive in most cases and are considered a dangerous dog breed. This incredibly strong dog is a crossbreed between an American Pit Bull Terrier and a Neapolitan Mastiff. In spite of its muscular look, the dog was not originally bred for fighting. Nevertheless, some have used it as a fighting dog.

The Cane Corso is a well-muscled dog that can weigh anywhere between 99 to 150 pounds. The breed is a descendant of the Canis Pugnax, which were dogs used by the Romans in warfare. One of the most dangerous dog breeds.

Bull Terrier is known for their large egg-shaped heads, they are exceptionally strong dogs with a #1 ranking in pound-for-pound lean muscle tissue. The breed is known to have a strong “prey drive” which makes the Bull Terrier a dangerous dog towards smaller animals.

Originally from Southern Africa; this dog is known for its ability to keep lions away from prey while the dog’s master makes the kill. This semi-domesticated ridged hunting dog is loyal and intelligent but is very aloof to strangers. Avoid rough treatment and inculcate good socialization skills since they can be over-sensitive and may develop an aggressive side.

The Dogo Argentino is a large, white, muscular dog that was developed in Argentina primarily for the purpose of hunting for wild boar and puma. It is illegal to own a Dogo in the United Kingdom under the Dangerous Dogs Act of 1991.

The Boer Boel is a large, mastiff dog breed from South Africa which was bred for the purpose of guarding a home or farm. These dogs were often the first line of defence against predators and were valuable in tracking and holding down wounded game. Bore Boels are loyal but very protective of their families. 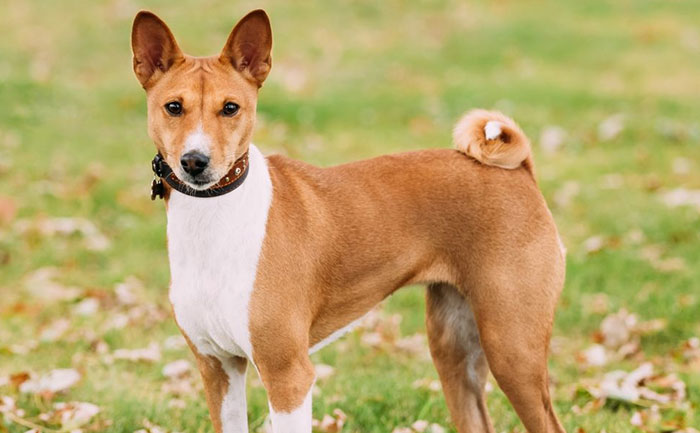 A breed of hunting dog that originated from Central Africa. They exhibit alertness, curiosity and affection, though they are reserved with strangers. They are one of the least trainable of all breed types.

The St. Bernard is a very large working dog that originated from the Swiss and Italian Alps. They are famous for their Alps rescue mission abilities. They must be trained to be sociable with strangers and other dogs during their infancy in order to prevent aggressive territorial behaviour.

The American Bull Dog is a muscular heavy dog. Though they are known for their pleasant and friendly demeanour, they can also exhibit the trait of ‘stubbornness’ as they are extremely confident. They were earlier used as working dogs as they could catch wild boar and cattle, kill vermin and also guard their owner’s property.

Also known as the German Mastiff or Danish Hound, this breed of the domestic dog is famous for its massive size. They hold the record for the world’s tallest dog at 44 inches and was originally bred to hunt wild boar and deer in Germany.

The Fila Brasileiro also is known as the Brazilian Mastiff is a large dog developed in Brazil. It has great tracking abilities but is an aggressive and impetuous dog. Due to its size and potential for aggressiveness, it has been banned by many countries. 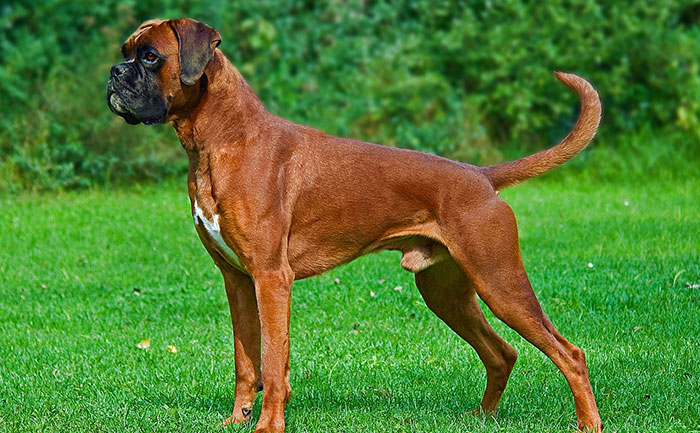 Boxers are originally from Germany where they can grow from 50 to 70 lbs. Though they have a playful and energetic personality but are very headstrong. They are listed in our 25 most dangerous dogs breed list due to 48 negative incidents involving the breed from 1982 to 2012. 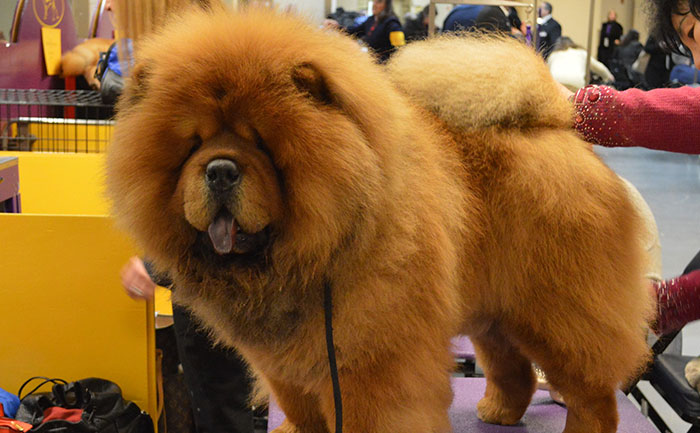 Though they seem to be distant and independent, this breed of dogs requires staunch attention from their owners if they do not want them to grow aggressive and ill-bred. They are originally from China and weigh around 50 to 70 lbs Chow Chow can also be referred to as Songshi Quan or ‘puffy-lion dog.’ They can be fiercely protective of their owners and are also considered as high-risk dogs.

A breed of dogs that originated from Germany, the German Shepherd can weigh as much as 70 to 100 lbs. Known for being intelligent, confident, alert, vigilant, and fearless; the police use them for their K-9 units. But due to their overprotective nature towards their family and territory, if not socialized correctly; can lead to attacks.

A large spitz breed of dog that originated from mountainous regions of Japan, it is known for its two breed types: the Akita Inu (Japanese Akita) and the Akita (American Akita). Strong, independent and dominant breed, they are affectionate with family members but are aloof with strangers due to their territorial attitude.

Corporate Tax Rate To Cut From 30% To 25.2% To Boost Companies, Announces Nirmala Sitharaman