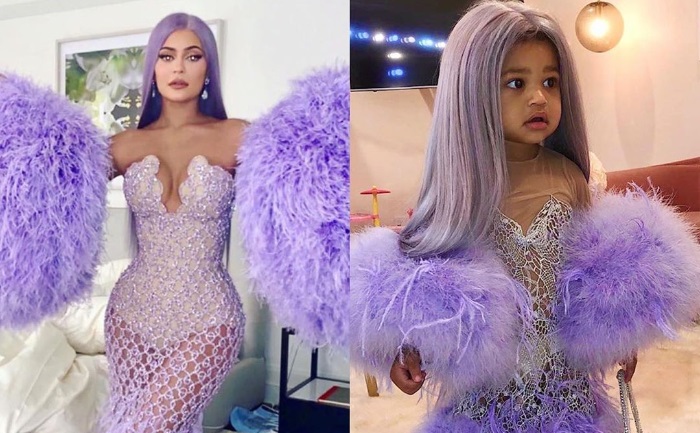 Kylie Jenner‘s cute daughter Stormi Webster is the ultimate fashionista like her mother. The adorable toddler just debuted her first Halloween costume of the season. She took inspiration from none other than her famous mother. Yes, Stormi recreated her moms MET gala look for Halloween and she really nailed it down to the purple wig and feathered Versace dress.

Stormi was seen in a miniature version of Kylie’s stunning purple Met Gala dress from earlier this year. She even had a purple wig to match as she posed up a storm in a living room with a blush pink couch.

Little Stormi was recently seen hitting the pumpkin patch with her mom Kylie, dad Travis Scott, and cousins Dream Kardashian, 2, and True Thompson, 1. The baby was rocking the cutest Halloween jumper by Stella McCartney Kids for the outing.

What do you think of Stormi’s Halloween look? Do share with us.

Stormi’s parents Kylie and Travis have been in the news for their relationship. The duo has decided to take some time off from each other. Recently reports of Kylie’s extreme closeness with Drake has sparked rumours that the reality star might be moving on from Travis. But there has been no confirmation of the same as yet