Valmiki: First Look poster of Pooja Hegde as Sridevi out 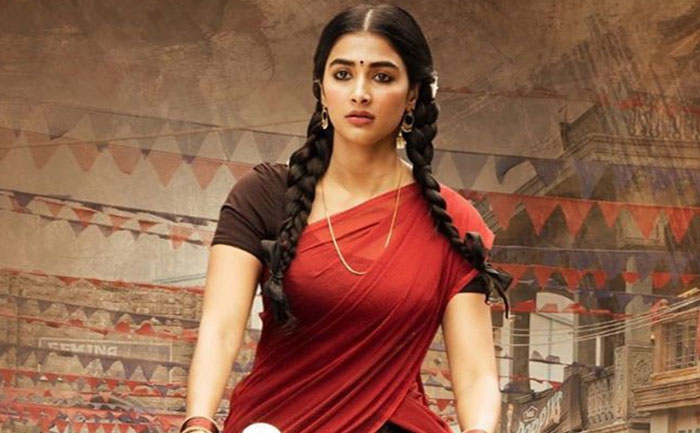 Mohenjo Daro actress Pooja Hegde will soon be seen in Telugu film ‘Valmiki’. The Diva was last seen in Mahesh Babu starrer ‘Maharishi’. Fans were impressed with her role and performance in Vamsi Paidipally’s directorial. She will next be seen in the Harish Shankar movie opposite actor Varun Tej. The actress has shared her first look from the movie on social media and she is looking gorgeous as Sridevi a village belle in it.

Check out the first look poster of Pooja Hegde from Valmiki here:

In the first look poster, the glamorous actress who is one of the most talented beauties of Telugu cinema is seen in the avatar of a village belle. She has truly nailed the look and the picture has garnered much love from fans.

‘Valmiki’ is a remake of Tamil film ‘Jigarthanda’, the dark comedy features Varun Tej , Atharvaa and Pooja Hegde in the lead roles. Pooja is depicting the role of an actress in the movie.

Produced by 14 Reels Plus, ‘Valmiki’ is set for September 13 release.

On the work front, Pooja is also shooting for Hindi movie ‘Housefull 4’. She is also preparing for Tamil movie ‘Ala Vaikuntapuramlo’ which is releasing on Sankranthi 2020. Pooja Hegde will also be seen opposite superstar Prabhas in his next film which will be directed by Radha Krishna Kumar.

WHAT? Has Shraddha Kapoor really charged Rs 7 crore for ‘Saaho’? Find Out